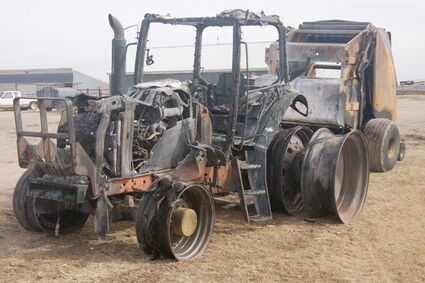 Anything inside the Quonset at the Cliff Mazour farm did not fare well with the fire last week. While the building doesn't look too bad from outside, it is totally destroyed. Farm equipment that was in the building at the time was made useless, sort of like the tractor in the picture above. Everything not made of metal was burned.

Fire calls for many rural fire departments can be 'few and far between'. Or, they can 'come in bunches.'

For the Lawrence Volunteer Fire Dept. this winter has been interesting. They had been making plans for a "Practice Burn" on a structure in Lawrence when they got surprised . . . in fact two surprises, this past week.

Last week Tuesday, they were called to the Cliff Mazour home northeast of Lawrence, just into Clay County. Mr. Mazour had just finished feeding cattle and he returned the tractor to the building, just as he had done many time before. He traveled over to his chicken barn j...