Drainage tile being installed near Superior 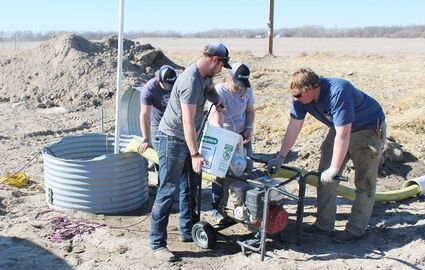 Workers from Dynamic Drainage LLC are installing drainage tiling on land farmed by Andy Meyer south of Superior off Diamind Avenue in Jewell County. The project will drain 50 acres of farmland and improve productivity. The workers are pumping water out of the tank at the end of the main drain line.

A plot of land located just south of the Nebraska-Kansas border is the site of a drainage tiling project. When completed, the project will increase the productivity of 50 acres of arable farmland.

The land, located south of Diamond Ave., is having an extensive drainage system installed. Four workers from Dynamic Drainage LLC, Columbus, have been at the site for more than two weeks. They have installed the main line and tank.

Andy Meyer is the current tenant on the land. He noted he has not planted a crop for several years on the affected acreage because of the dampness of the ground. The moisture problem is the result of leakage from the Courtland Canal. There were drain tiles installed under the field at one time. Some have deteriorated while others became clogged. The Kansas Bostwick Irrigation District water jetted some of the line recently which led to a slight improvement in drainage rates.

Meyer made the decision to undertake the tiling project as part of his commitment to sustainabilty. This has led him to improve the land he farms with modern conservation methods.

Tiling is an effective method to drain oversaturated land. The project has a main line. Secondary lines are laid out along with laterals to drain the 50 acre area. Excess water from the ground seeps into the tile and drains by gravity flow to a tank. A pump installed in the tank then pumps out the drained water and returns it to the nearby Republican River.

The tile plow (left) digs ba trench, lays the tile pipe and covers it, in a continuous operation. A crew from Dynamic Drainage LLC has been installing a drainage system on land farmed by Any Meyer off Diamond Avenue off the Webber Road in Kansas.

The Dynamic workers utilize a tile plow. This machine digs the ditch, installs the tiling and covers it over. The tiling pipe is matched to the specific soil of each project. To keep the lines from clogging, incisions are made with a razor blade . These minimal cuts allow the water to enter the pipe without the surrounding soil clogging the pipe.

Before the site work begins, a GPS survey is made of the land. A computer program is then developed. The data is fed into a computer onboard the tile plow. The computer and the human operator then place the tiling where it needs to be placed.

Meyer takes a long-term view of his farming practices as he works to ensure the land is improved and sustainable for future generations of his and other family farms.

His view is the cost of the project is offset by the substantial crop yields which result from tiling the land. He has used the method successfully on land he farms in the Bostwick area. With the completion of this project Meyer will farm more than 150 acres of land which has drainage tile installed.

The project is a commitment to the land and his family to keep it productive and protected for years to come.