The Lawrence-Nelson boys basketball team navigated their way through the sub-district D2-3 bracket with wins over Deshler last Tuesday, 43-49 and Giltner Thursday, 44-30, to move on to the D-2 district finals. The sub-district tournament was played at Nelson.

The Raiders will enter district play as the number 15 seed. They will play number two seed Falls City Sacred Heart at Diller-Odell High School, Odell, Tuesday for the opportunity to advance to the state tournament at Lincoln. 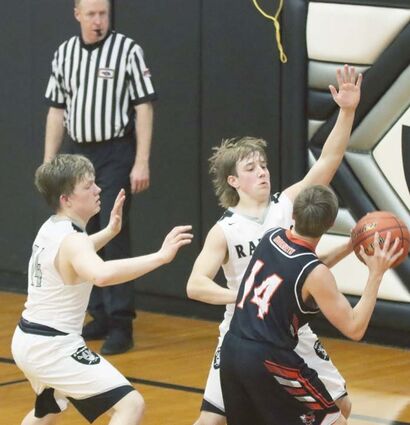 The old saying about winning a game with defense as much as with offense seemed true in the sub-district final game last week against Giltner. In this picture, defensive pressure by Krayton Kucera and Conner Janda helped hold Giltner to only 30 points. The Raiders held opponents to 30 points or fewer only three times all season. (Courtesy of Denise Mazour.)