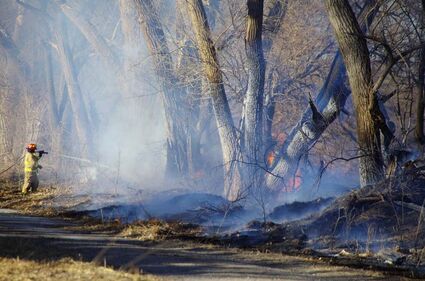 Late Sunday afternoon, members of the Superior Volunteer Fire Department were called to extinguish two fires. Both could be seen from Highway 14 just south of the Republican River bridge. One was on the west side of the highway on the south side of the Republican River. And the other fire was on the west side along the old highway which is directly north of occupied houses. Above, firemen work along the old highway to extinguish a fire in large cottonwood tree.

The Superior Volunteer Fire Department responded to fires on both sides of Highway 14 south of the Republican River bridge Sunday. Fires were burning on both sides of the highway. Scott Nondorf, Superior fire chief, reported he issued nine burn permits Thursday. Snowfall had lowered the fire danger. One of the permits was issued to Andy Meyers. He was burning trees along the river bank Thursday and Friday as part of a controlled burn.

Nondorf invoked the local mutual aid compact to assist in fighting the blazes.