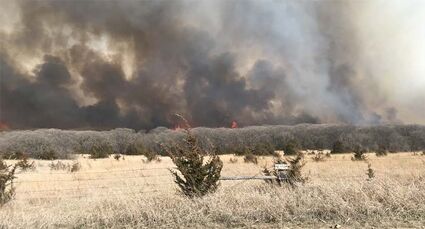 As this issue was being put together Tuesday afternoon, a wildfire was sweeping northwest across Jewell County.

A farmer in the North Branch area said from his house it appeared the flames were leaping 30 feet into the air. The National Weather Service radar at Blue Hill was seeing the smoke plume coming from the fire.

Unconfirmed reports indicated fire departments from Mankato, Burr Oak, Esbon, Guide Rock, Red Cloud, Superior and Nelson had joined in the fight and we expect more may be asked before it is contained. The storm spotter training class the National Weather Service had planned to hold at Mankato Tuesday evening was postponed because most of the people expected to take the class were out fighting the fire. 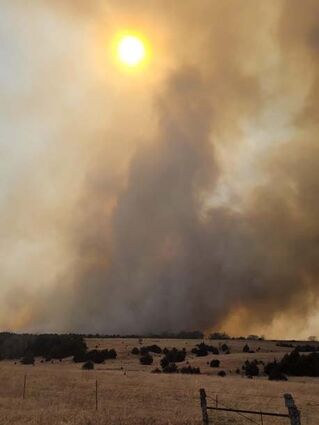 It was the second call on Tuesday for the Superior department. Earlier Tuesday afternoon the department had been called to fire about 3 miles south of Superior. That was three calls for the Superior Department to the same area in four days. The Lawrence department battled a fire much of Monday night.

The Burr Oak fire may have started near the intersection of Roads X and 90 which is about two miles west and three north of Burr Oak. As additional information is obtained we will update the newspaperʼs web page which can be found at http://www.superiorne.com. Much of the information in this story is unconfirmed at this time.

At 6 p.m. Brad and Colleen Jeffery reported their house and buildings were still standing but they had lost all their machinery that had been parked in a nearby draw. Unconfirmed reports indicated the house of Shonda Wilson and Alex Moser might be on fire. The highway beween Guide Rock and Burr Oak was closed. The first reports of the fire came in about 1 p.m. Smoke was showing on radar as far north east as Aurora, Neb.