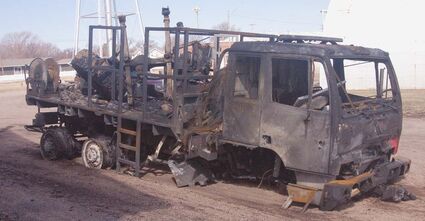 This Lawrence Volunteer Fire Department (LVFD) tanker-grass rig truck was new to the department eight months ago. Last Tuesday, it met its untimely demise as firemen assisted with a large prairie fire between Guide Rock and Burr Oak. Above, the truck rests in Lawrence after being returned Wednesday evening. The LVFD and the insurance company are working on the settlement. (Photo by Allen Ostdiek)

Prairie fires have been a major source of concern since the great plains were taken over by farmers and ranchers 150 years (+-) ago. Most farm families have stories of ancestors that plowed fire breaks around their homesteads.

In current years, the threat of these fires has diminished greatly, but they still happen . . . even close to home.

A year ago, a prairie fire burned north of Guide Rock to the east and south, ending up in Kansas. The Lawrence Volunteer Fire Dept. (LVFD) was called upon for "Mutual Aid."

Last week, the LVFD was called again for Mutual Aid to assist in fighting a fi...