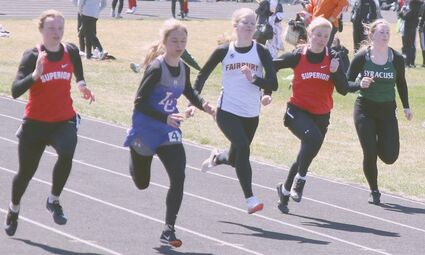 Halle Bargen (left) and Laci Kirchhoff compete for Superior in the 400 meter dash at the Scott Nisely Memorial Classic at Syracuse.

It was a busy Thursday for the Superior High School boys and girls track and field teams. The Wildcats competed at two different meets. One squad traveled to Syracuse for the Scott Nisely Memorial Classic at Syracuse High School. There were 11 teams at the meet, nine Class B schools, Norris, Nebraska City, Crete, Beatrice, Syracuse, Lincoln Christian, Auburn, Fairbury and Falls City. Superior and Louisville were the two Class C schools. The other squad competed at the Del Wicks Invitational at Deshler. Other teams at Deshler were Thayer Central, Meridian, Lawrence-Nelson, Friend and Doeches...