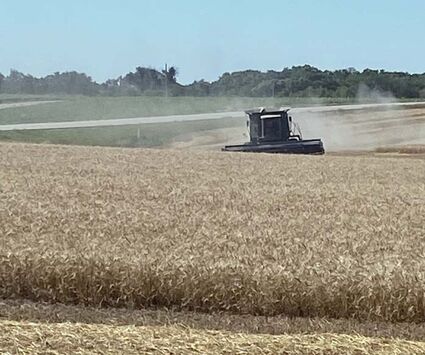 Wheat harvesting was in full swing north of Ionia on the Boden farmland.

It's Kansas wheat harvest time in this area. As I write, whirling combine reels can be heard off in the distance, a neighbor is cutting wheat from one of his fields. That's all it will take in this rural neighborhood. When the sounds of wheat harvest starting is heard, other area farmers get the itch to start their combines.

Though in this area, wheat harvest isn't what it used to be years ago. Most of the farmers have diverted their crop interests from wheat to all fall crops. Around the area where I grew up, mostly wheat was drilled with some milo fields planted but it is not that way anymore. Now wheat harvest takes about a week to complete and if the weather cooperates, it may be over before then.

My farmer father decided in the early 1960s to make additional income by becoming a custom wheat harvester. He went south soon after Memorial Day, or as soon as the milo was planted and the first cutting of alfalfa was baled. He started going with his brothers to cut wheat in southern Kansas. When father was getting ready to leave on his harvest route, Mother would use a marker to post his initials on all of his clothes so when washed with other harvesters and their hired hands, clothes, would not get mixed up.

Father hired the high school boys who sought summer jobs. Some parents even came to father asking if their sons could go with dad as they knew my father would teach them well and would treat them fairly. Mother would be updated on how many cattle were in each pasture, as it was her responsibility to check on them regularly while father was gone. The panic came when the phone calls began to come from the farmers down south who were his customers, said the wheat was ready for harvesting.

The day before father and hired man would leave, the harvest truck and combine were taken to a high bank area, where the combine could be driven onto the truck bed, with the header remaining attached. It was quite a feat to get the combine loaded but it was somehow accomplished. Of course back then, the combine headers were much smaller than they are now.

Father and other custom harvesters had their route mapped out. They noted the under passes that needed to be avoided, where the trucks could stop and fuel up, and they would figure out how long it would take them to get to their first cutting job.

The wheat harvesting bug seemed to bite father and in years to come he'd start cutting in northern Oklahoma then into Kansas. After stopping at home to harvest here, he'd continue on into South Dakota and North Dakota. He made friends with his customers, and they would keep in touch via phone calls and mail through the years to come.

The mode of custom harvesting travel evolved as the headers got longer. The combine itself continued to be loaded onto the truck bed, but the headers were placed on a trailer and pulled by the pick up. The next step was acquiring a combine trailer that carried the combine.

In later years, father would go wheat harvesting with the Jeffery Brothers. There was never a dull moment on the harvest run. In southern Kansas, the bunch would be welcomed to stay on the farmstead of a customer. Meals were provided by the harvester's wives who would travel for a while with their husbands. Father yook his guitar, and every Sunday morning the harvest group would attend a local church and provide special music. When it rained, the group would head into town to visit and see the sights. Many harvest stories and jokes were told over and over again through the years by father and the Jeffery Brothers about their harvesting experiences.

In time, father would give up his northern route and go to the southern Kansas area. Eventually, he decided that it was time to end his custom harvesting business and just remain farming and ranching at home.