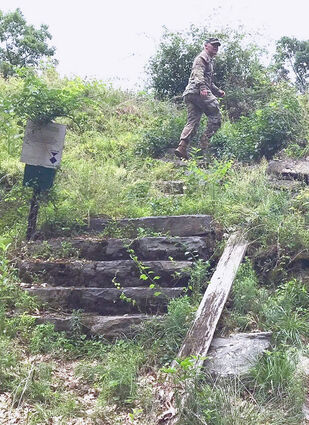 Cadet Max Kohmetscher, Aurora, Neb., native, almost gets lost in the background as he searches some of the less well-known historical sites near West Point Military Academy in New York.

"Wisdom, through History" may not be what many people think of when

considering military training, but it plays an important part in the lives of cadets at the Military Academy at West Point, New York.

Aurora, Neb.,and the grandson of Dick and Marge Kohmetscher of Lawrence. The following information was recently put out by the history department at the academy.

"Though historical sites like Fort Putnam and Redoubt 4 are rather familiar to members of the West Point community, CDT Kohmetscher and MAJ McShea are spending...