Bev Czirr has been Superior's public pool lady for 40 years

For generations of Superior Municipal Pool users, Beverly Czirr is the pool lady, a Nuckolls county mermaid. Czirr, who is passionate about teaching youngsters to swim, witnessed her three-year old sister swept away in flood waters and drown.

Czirr, who grew up on a farm south of Shickley, is a long-time Superior resident. She married Evan Czirr, a building contractor, who worked with Vernon Quy. The couple later purchased the business from Quy. Evan died in 2001.

The couple had two daughters. Paula resides in Coeur 'd Alene, Idaho where she is a director of resident life at a local institution of higher education. Jenelle Teska resides in Sioux City, Iowa where she works as a recruiter for a staffing company. She is married and the couple have four children.

Czirr became involved with the Superior Pool in an official capacity in 1983. She had taught her daughters how to swim at the pool. She also was a pool patron for many years prior.

She was appointed to the Superior Parks Board by Mayor Roland Wages in 1983, along with two other members. Czirr indicated she was interested in the pool and was given responsibility while the other two board members oversaw the baseball fields and the cemetery,

Elaine Miller convinced Czirr to secure a pool operator's certificate. Czirr was concerned about the lack of consistency in the operating hours of the pool. She eventually resigned from the park board to assume the pool manager position.

Czirr has slowly cut back her involvement with the pool citing the need for new blood to keep the operation flowing smoothly. She allowed her Red Cross certificates to expire last year. She will not renew her pool operator certificate when it expires in October. 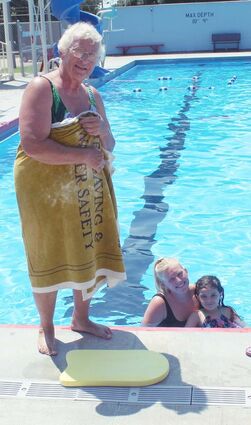 Bev Czirr (left) stands by as Emma Henderson and Emma Moses take a break from their swimming lesson at Superior's Municipal Swimming Pool Monday. Czirr has been a mainstay at the pool for more than four decades as a manager and swim instructor.

Czirr has overseen many improvements at the pool during her tenure. Water slides have been installed. The bathhouse has been updated with new hot water heaters among other upgrades.

Czirr has turned over the operation of the pool to Liz Headrick Ginter, a one-time life guard at the pool and Seth Going.

Czirr would like to continue instructing the youngest children in the rudiments of water safety. She hope her tutelage will save lives. For generations of Superior youth, lessons with Bev have been a pathway to the enjoyment of swimming in safety.