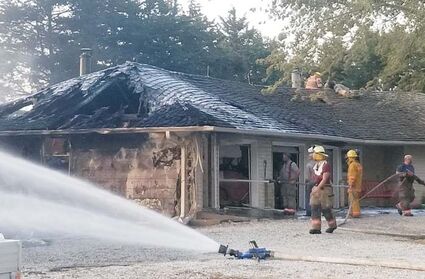 Late Thursday afternoon, volunteers responded to a house fire near Nora. A fire that had started in one of the outbuildings near the home, spread to the garage and house. Nelson, Ruskin and Deshler fire department were dispatched to help. No one was injured.

Thursday afternoon was a bad one for fires in the area between Nora and Hardy. Two were reported about the same time.

The Hardy and Superior departments were called to battle a soybean field fire on the former George Hansen farm northwest of Hardy. The trucks were out about 4 hours.

About the same time, members of the Nelson, Ruskin and Deshler deparments were fighting a structure fire along Highway 136 at a location some have described as the former Alvin Epley home.

That fire apparently started in a barn and spread to the garage attached to the modern ranch-style home.