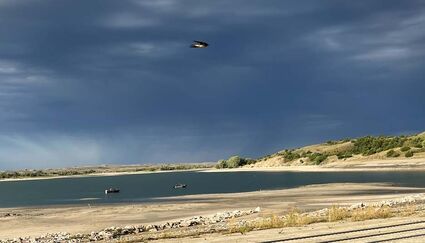 The water level is down on Merritt Reservoir so more of its sandy white beaches can be seen. There is still plenty of water for fishermen and boaters.

For those who think they can not take a long vacation, they need to check out what Nebraska has to offer. When COVID hit and the quarantines started, I looked for alternative ways to vacation. I found an adventure waiting for me in Nebraska.

For more than a decade, Nebraska has offered a fun way to see the state called Nebraska Passport. Each year 70 places of interest across the state are listed in a passport book. The first page opens to a map of the state with each of the sites marked on it. Highlighted are 10 categories with seven stops for each. There are coffee shops, craft stores, museums, food places, shopping stops, state parks, breweries, family fun stops and animal attractions. Those who make all 70 stops on the passport will see a wide range of what Nebraska has to offer from corner to corner and in the center of the state.

Passport season this year began May 1 and ends September 30. Each year, booklets can be picked up at one of the 70 stops or the Nebraska Passport app may be downloaded. At the destinations participants can have their passport booklet stamped or collect a digital stamp. The app has an easy to use Google Map to lead participants to their destination.

My friends and I use Nebraska Passport as a scavenger hunt. We take a day or two when we can get together and head off on an adventure. This year we took three two-day trips and two one-day trips to capture all 70 stamps. Again we were awed by the beauty and topography of the state. Landscape and moisture can change in just a few miles. The eastern part of the state was green and lush. The western part of the state had places that were extremely dry with crops burned up. Most all of the lakes showed low water levels. A few rivers were running with water like the Niobrara and Loop while others had just a trickle of water or dry, like the Platte River.

When we were headed to Spencer, we saw the remains of Spencer Dam along the Niobrara River, which was destroyed by too much water in the wake of the historic 2019 flood. It will not be rebuilt. Instead, it is scheduled to be torn down.

I enjoyed stopping at several of the places. We visited a lavender farm near Big Springs where we could cut flowers and learn about lavender. The apple orchard at Nebraska City was one of my favorites. It has a playground for children and fresh produce. The quilt shop in Fremont was a highlight for one of my quilter friends. We had delicious pizza at a brewery near Ohiowa.

We did not stop for long at all of the destinations, but I plan to visit several another time. Many of the places I visited over the years, I have returned to see again.

The last leg of our adventure took us through the sandhills-miles of nothing but sandy grass covered hills, a few windmills and cattle-south of Valentine to North Platte. Beautiful country! Our last digital stamp was at a reservoir in the sandhills, Merritt Reservoir State Recreation Area. The sugar sand beaches were large since the water level is down, but fishermen could be seen on the lake. The recreation area is known for its dark skies that make for the best stargazing. When we arrived home, I heard while we were there it was declared an "international dark sky park." 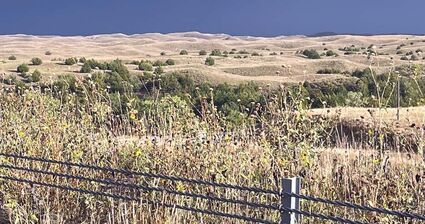 Merritt Reservoir State Recreation Area is in the middle of the rolling sandhills.

My friends and I have completed this year's Nebraska Passport. Along the way, we made memories and have seen many amazing Nebraska sites. We look forward to the adventures that await us next year on the 2023 Nebraska Passport tour.