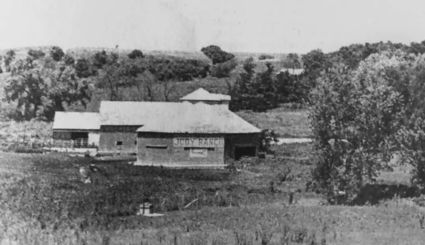 A 100-year-old landmark barn is no more. On Saturday, the octagonal built Judy Barn was disposed of. It will no longer be a landmark for travelers making their way along Highway 36. For Jewell County residents, it was a historical landmark that reminded them of another time. Located between Mankato and Montrose, this barn was rich in local history and the history of four generations of the Judy family.

It all began with Alexander Judy. He was raised in Missouri but longed to become a cowboy and cattleman so he headed to Colorado where he worked on a ranch. He quickly started his own cattle herd and as his wealth grew he returned to Missouri. On his way home, he traveled through Jewell County country that looked promising for establishing his own ranch. Back in Missouri he married and began his family but he never forgot Jewell County. In 1878, Alexander and his family came to Jewell County and established the Judy Ranch two and a half miles northeast of Burr Oak.

A grand three-story house was built there. Soon the ranch consisted of 2,200 acres of mostly grassland for his cattle herds that numbered up into the hundreds. A brother, Colonel John Judy also came to settle here. Alexander’s son, Ora Judy, began to take over the ranch operations.

In 1893, Alexander and his wife built a grand Victorian house in Burr Oak that is currently the home of Gary and Penny Turner. According to the book “Burr Oak, The Roots Run Deep,” the large back lot behind the house was used as a horse pen and the horses were sold to the government.

Alex Judy kept busy and served on the board of the Jewell County National Bank in Burr Oak and constructed some business buildings in town. He went on to become the postmaster at Burr Oak.

Alexander’s brother ran a livery stable in Burr Oak at that time. Ora Judy and his family lived in a large three-story house that it is believed he had built, in Mankato, north of where the grade school building is. Ora’s son, Bradley Judy, remembered as a youth enjoying riding the train between Mankato and Burr Oak to visit his grandparents.

The Judy Ranch included ranchland east of Mankato and it was in 1915 that the Judy Barn was constructed on this ranch, according to a Kansas State Historical Society article. The designer was a local man, Jude Elliot. A relative of a local contractor of the time, J.W. Berry, Jewell, said it was Berry who constructed the barn. The Judy Barn was included in” The Round Barns of Kansas” a Kansas State Historical Society article which featured 41 of the state’s barns.

The Judy Barn was octagonal with a center silo. It was 58 feet in diameter and 30 feet tall. It was built to house cattle. The silo was 20 feet in diameter, built of wood and projected through the roof. The barn was constructed primarily of cottonwood. In 1950, the outside of the barn was covered with metal siding. The barn roof was segmented and single pitched.

Ora Judy died at the age of 36 and his wife and family, including a daughter and a son, Bradley moved to Lawrence, Kansas. After graduating college, Brad Judy desired to return to the family ranch. Brad and his wife, Marvel, moved into the ranch house east of Mankato and Brad continued the family ranching tradition for more than 40 years. The ranch operation was turned over in 1975 to the next generation of Judy’s but eventually the ranch land and the property where the house and barn stood were sold.

The Judy Barn, with it’s name proudly displayed on the side, along with the Judy brand for all to see that passed by on the highway, are gone. Like most large wooden barns it was razed because of deterioration and not being suitable for today’s farming operations.

The Judy Barn and Judy Ranch will have to be kept within the pages of the Jewell County history.