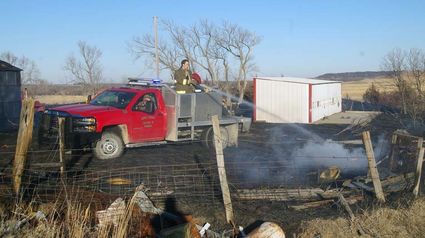 Members of the Formoso Volunteer Fire Department responded to a fire last Wednesday afternoon at the Wayne Snyder residence southeast of Lovewell Lake. Fire burned the grass from the gravel road (Road V) to the log house and then burned grass and debris from an old farm site to the east and south of the house. Above, firemen look for hot spots at the perimeter of the fire line south of the house.

As members of the Formso Fire Department answered a call for assistance last Wednesday and headed to the Lovewell area, Bob Rouse, the department's fire chief, told the fire fighters "It is dry enough to burn and wet enough to sink." He did not need to add "Be careful," for the experienced fire fighters knew the risks.

The disappearing February snow cover has left numerous wet spots where a truck can sink into the mud but low humdity has made the proper environment for the cover to burn. 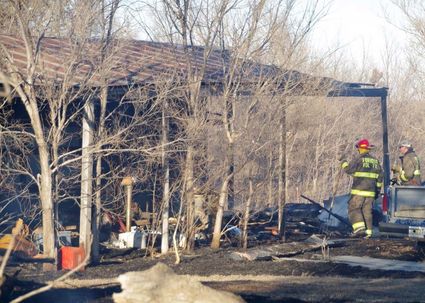 Tuesday, with the humidity ranging from 14 to 20 percent and winds gusting to as much as 31 miles per hour, the National Weather Service issued a Red Flag Warning for much of North Central Kansas. When such an alert is issued, residents are advised to be extra careful because a fire had increased potential to spread quickly and be difficult for fire fighters to control.

Such was also the case last Wednesday when members of the Formoso department were dispatched to Wayne Snyder home south of Lovewell Lake and west of the community of Lovewell.

There an out of control fire was threatening the Snyder home and outbuildings. It is thought a slough area to the south would have helped keep it from reaching the grasslands common to the area and allowing the fire to expand in size.

The two departments were on the scene about and hour and a half before the fire was controlled.

Rouse said a long driveway and the fact Snyder had the grass cut short near the house aided their effort to protect the log-style home. An open-front machine shed was destroyed by the fire.