The Nelson Volunteer Fire and Rescue department members held their 5th annual street dance and served a free-will donation dinner Friday. The meal was donated by Carroll and Patty Sole and Caps Cafe. The dinner consisted of a pulled pork sandwich, beans, potato salad, chips and a cookie. The meal collected a little more than $1,000 for the departments. Jay Lyon and John Hodge cooked the pork and potato salad. It is a family recipe made by Chelsey Seamann of CAPS cafe. 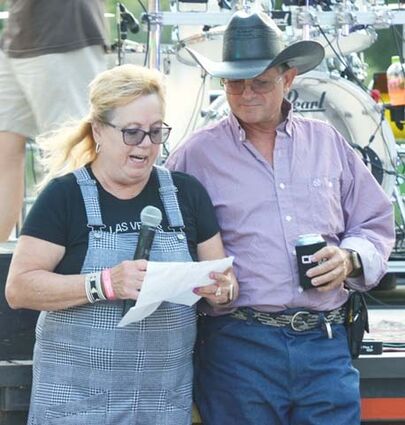 Patty and Carroll Sole presented a heartfelt thank you to the Nelson Volunteer Fire Department, surrounding departments, area farmers, family and friends for all of their efforts on November 8th, 2020. Their farm, as were many others, was in the path of the fire.

Patty Sole put together a collage of photos from the Nov. 8 fire. She gave a moving speech thanking everyone who helped that day. Had it not been for our volunteers, neighboring departments, farmers, family and friends, that day may have ended differently.

The band, Modern Kowboy, was booked for the event. An assortment of door prizes were donated and names were drawn thoughout the evening. Also donated was a set of Garth Brooks tickets that were raffled off. Phil and Diane Werhman donated the concert tickets. The drummer from the band, Will, won the prize. The dance cover was $10, but it was decided at the last minute not to charge admission. The departments brought in more than $3,500 for the entire event.