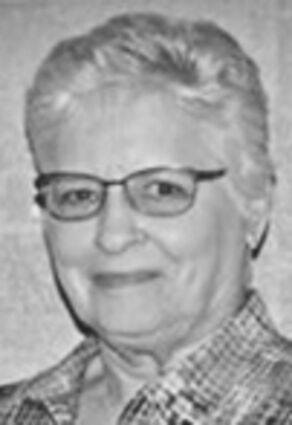 Catherine "Cathy" Verna Ahrens, Superior, the daughter of Raymond and Helen (Tanner) Uhrmacher, was born on March 9, 1940, at Hastings, Neb. She died Nov. 15, at Parkview Haven Nursing Home in Deshler at the age of 81 years.

Cathy grew up on the family farm near Cadams. She attended grade school at Beach District 44 (east of Cadams) through the eighth grade and graduated from Superior High School with the Class of 1958. She was baptized at Immanuel Lutheran Church in Hastings, and confirmed at Salem Lutheran Church, Nelson, where she was also united in marriage with Loren Ahrens on May 1, 1960. This union was blessed with four children: two sons and two daughters. The couple made farming their life's work in the Superior area.

Cathy worked at Brodstone Memorial Hospital, Superior Pharmacy and Price Funeral Home in Superior, until she retired. Cathy and Loren liked to camp, making many trips to Colorado when the children were young.

She loved her family and enjoyed baking, gardening, flowers and time with her grandchildren. Her hobbies included reading, baking (well known for her homemade ice cream and monkey bread), canning from the garden (making a variety of pickles). The couple enjoyed playing cards, belonging to a couple's card group. Cathy also played cards with a women's card group. Cathy was a member of Centennial Lutheran Church and actively involved with LWML.

She was preceded in death by her parents; husband, Loren in 2006; brother, Melvin Uhrmacher in 2011; and infant sister.

Her funeral was held at 10:30 a.m., Saturday, Nov. 20, from the Centennial Lutheran Church in Superior with Rev. Robert Hopkins officiating.

Music was "Amazing Grace," "I Know My Redeemer Lives" and "Old Rugged Cross," with Heather Dahl as the organist.

Memorials are suggested to go to Superior Volunteer Rescue or in care of the family.

Condolences may be sent to Megrue-Price Funeral Home, 750 N Commercial, Superior, Neb. 68978 or in care of www.pricefuneralhomes. com.