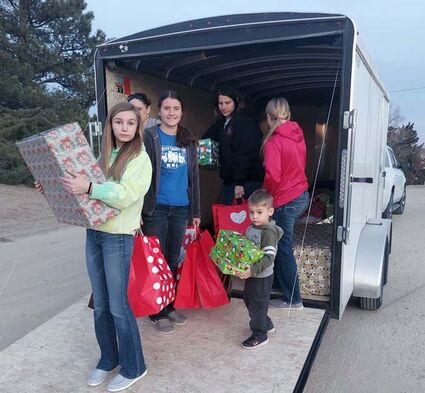 Wildfires scorched more than 400,000 acres of North Central Kansas in mid-December as a fierce wind storm roared through the area. Houses and outbuildings were destroyed, pasture and crop land scorched and cattle perished by the hundreds. The devastation came not long before Christmas. In this time of trouble, communities across the area demonstrated what the spirit and meaning of community and Christmas truly are.

Residents of the Guide Rock community had a close brush with a similar situation less than a year earlier. An out-of-control fire left miles of land blackened. Fortunately no buildings were lost and there were no livestock losses. But the people remembered. It was not a question of if but how could the community assist those who had lost so much so near the holidays.

Trisha Rust and Kim Ely are leaders of the Warrior 4-H Club which has more than 20 members. They took it upon themselves to solicit donations to be used to provide Christmas presents for affected children. They were joined by Kent and Katelyn Duffy as well as Danny Shipman in raising funds. In one day, the community contributed more than $3,000 to fund the Santa present project. Leftover funds were used to assist livestock raisers and farmers affected by the conflagration. This is not the first time the Warriors 4-H Club has reached out to communities affected by a natural disaster. In 2019 the club sent fencing supplies, hay along with a check for $1,000 to asist flood victims inthe Fullerton, NE community.

The community also pitched in with contributions of hay. Kent Duffy was delivering a load of round bales to Lucas on Monday. At least another three truckloads will be sent soon.

Children affected by the fire wrote letters to Santa. The quintet of Rust, Duffy, Stacia Shipman, Patsy Ord and Kelsey Bryan played the role of Santa's elves. They shopped for items on the lists in Hastings and Superior. Funds not utilized for the children's gifts were used to purchase fencing supplies, including t-posts and wire, veterinarian supplies and gloves.

The Christmas presents were delivered to the Paradise United Methodist Church, Paradise, for distribution across the affected area.

A Kansas veterinarian made a request for donations of honey. The call was answered with donations from Ohmstese Honey Farms and Frey's Abundant Life Honey. The honey is used to dress burns on horses.

Ely Grain donated horse feed. Donations of hay and other feeds are desperately needed. Ely, Inc., Guide Rock, will weigh donated hay and provide receipts for tax purposes. Cash donations may be made to the Cornerstone Bank of Guide Rock.These funds are used to pay for fuel to haul hay to the area.

Hay and straw may be dropped off at Guide Rock City Hall. For area hay pick-up, contact Kent Duffy or Justin Shipman. 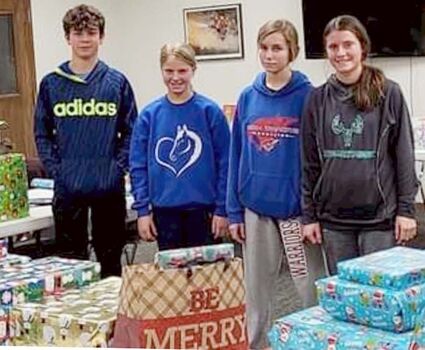 The groups plan to keep assisting the disaster area for as long as possible. All donations are greatly appreciated.

The organizers send a warm and grateful thank you to all who helped salvage Christmas for those who were left with little to nothing by the fires. Nature will heal the land and the generosity of the people of the Guide Rock community will help heal the human spirit.