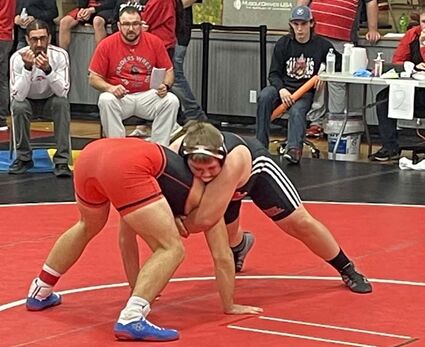 Nathan Elledge competed in the 220 pound division last week in the Norm Manstedt Invitational Meet which took place near Columbus, Neb. He is shown above during a match in that 22 team tournament.

The South Central Red Raider Wrestling team from the cooperating schools of Lawrence-Nelson and Sandy Creek sent three wrestlers to the Norm Manstedt Invitational held on the campus of the South Central Community College near Columbus, Neb., last week. Two of the three scored points for the Red Raiders. The summaries:

Rowan Jarosik (20-8) Rowan won seven of his eight matches for the day. In the semi-final round he lost to William Sprenger of Valentine, but in the match for 3rd place, he defeated Scottie Meier Jr. of Lincoln East High School. Rowan place third in the 113 pound division and...