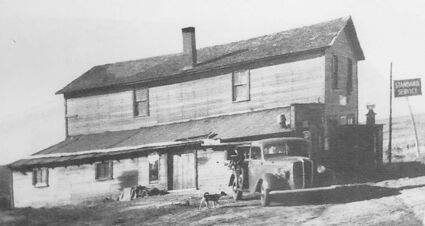 The Dentonia Post Office was organized on Aug. 25, 1882, and discontinued on Dec. 31, 1903. Bruntzel's Quick Reference to Kansas gives the location as Section 29 of Odessa Township.

The town must have sprung up in the early 1880s. Informative essays about Dentonia have been written by Max Atwood and Raymond Griffeth. Both grew up near Dentonia. Other authors, including Gloria Garman-Schlaefli, have written about the history and events of the community.

From these sources we learn Dentonia was at its apex in 1910 with a population of 60. Though the post office closed in 1903, there was a store, dance hall, blacksmith, school, a doctor and a church for some years after.

The Jan. 7, 1898, Western Advocate commented about "Henry Austin, the proprietor of the corner grocery store, on Main and Front streets, Dentonia." Whether the streets were actually named is not known but there were really only two streets – the two county roads. Today's 30 Road is "the Dentonia Road" and runs north and south. Today's I Road runs east and west.

Dentonia Items in the Sept. 6, 1906, Jewell County Monitor's relate "a ball game in town on Sunday" and "Dentonia closed up Saturday and went to the Lebanon Anniversary." The ball field was north of town.

A 1921 atlas shows "Dentonia." At that time, there was a store on the southeast corner, a school on the northeast corner, there had been a blacksmith shop on the southwest corner and home was on the northeast corner of the intersection (The church would come later.) There is a larger clustering of homes on the 1908 atlas. No sources give an idea of the reason "Dentonia" was chosen for the name for the post office or community.

Roger Fedde (Ionia) remembers the intersection and the Dentonia School District 109 schoolhouse and Dentonia United Church of Christ that stood there. Duane Atwood (Lebanon) remembers the school and remembers attending it in the early 1960s with 10 or 12 other students. Prairie Jewels (Shute and Dillon) notes the school closed in 1964 and was torn down in the winter of 1978-79. They also state the last church service was held on Sept. 13, 1998, and the building burned on Sept. 29, 2002.

Edgar Marihugh (Esbon) grew up two and a half miles north of Dentonia and remembers it quite well. He went to Odessa Grade School but his siblings went to Dentonia. He recalls many events and programs being held at the school. He also has many memories of dances and events in the room above the Dentonia store.

The store had a high ceiling and to get to the second story, there was an outside stairway on the west side of the building. It was high and narrow and "scary for a little kid." In the days before Marihugh can remember the I.O.O.F (Odd Fellows) and Rebecca Lodges met in the room.

Marihugh tells of hitching their horse, Nellie, to the cart and dashing down the two and a half miles to the Dentonia store, getting groceries and heading back home. The store eventually closed and was torn down around 1959. He also remembers the blacksmith's sod house. Though not in use, the soddie stood for many years after Frank Black moved his business to Lebanon.

An article in the Oct. 3, 2002, Jewell County Record related a bit of the history of the church. The Dentonia United Church of Christ was started in 1936 and the building constructed in 1938. Edgar Marihugh recalls the lumber for the building "came from north of Lebanon." He also remembers the construction of the church was under the direction of Mike McCleary.

The organizing of a post office and the store that soon accompanied it was likely the impetus for the beginning of Dentonia. Dentonia's first postmaster was Thomas Inks who served from Aug. 25, 1882 until Aug. 1, 1889. Inks was also the first store keeper.

The Ink homestead was in the E 1⁄2 of the NE 1⁄4 of Section 29. The is the southwest corner of the 30 Road and I Road intersection where the town of Dentonia would be located. Inks' land patent was granted on April 20, 1882.

Thomas H. Inks, a stonecutter, was born in Frankfort County, Ohio, on Sept. 16, 1823. He married his first wife, Elizabeth Moore, in Indiana in 1843. There he worked in the marble industry. The couple had six children. In 1856, he was appointed postmaster of Elkhart, Ind.

Inks also served for three years during the Civil War with Company K of the 30th Regiment of the Illinois Volunteer Infantry. He participated in the battles of Shiloh, Stone River, Chickamauga and the Siege of Atlanta. During his service, he received injuries which eventually left him blind.

After the death of his first wife, he married Susan Hill in Arkansas in 1868. They were in Kansas by 1880 with their three children. The family was still in Dentonia in 1889 but the 1890 Veterans Schedules of the Federal Census finds them in Franklin County, Ohio. Inks died in Nappanee, Ind., on Feb. 8, 1901.

Unlike the Inks family, the McLean's and their three children stayed in Jewell County for many years. They moved to Jewell in the early 1900s. John died there in 1916 and is buried in the Jewell Cemetery. Around 1930, Lizzie moved to Manhattan, Kan., to live with a daughter. After her death in 1942, she was buried beside her husband in the Jewell Cemetery.

In 1872 in Rock County, Wis., she married Civil War veteran, John Clement Craig. In 1884, they moved their family to Jewell County. The Craig's were not homesteaders. The 1880 U. S. Census indicates John Craig was a laborer and the 1900 U. S. Census gives his occupation as "Mail Carrier."

They lived in the Dentonia, Ionia and Esbon areas until about 1920. After that, they lived with their sons in Norton and Smith counties.

On June 4, 1931, while living in Smith County, John Craig died. He was buried with military honors in the Esbon Cemetery. Charlotte moved to Alva, Okla., to live with her son, Floyd. She died on Feb. 23, 1940, and is buried in the Alva Cemetery.

Henry Austin died in 1906 and Beulah Leland Austin in 1913. Both are buried in Wallace Cemetery east of Jewell.

The couple moved to Dentonia during his appointment as postmaster and they ran the Dentonia store. The Aug. 11, 1899, Jewell County Republican refers to him as an "enterprising merchant." But he "resigned" his position according to the Sept. 19, 1901, Jewell County Monitor.

They are found in Scandia in the 1905 Kansas Census and the 1910 U. S. Census. There he is said to be running a restaurant. After that, they seem to disappear and documentation about the rest of their lives has not been found. 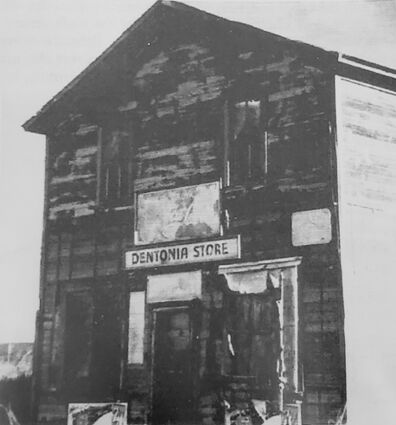 This is the Dentonia Store. The photo is in the Virginia Alexander collection. On the right side of the two-story building, you can see the "scary" stairs Edgar Marihugh climbed to get to the second floor.

The final Dentonia postmaster was Albert S. Clement. He began his appointment on Sept. 16, 1901, and served until the Dentonia Post Office was discontinued on Dec. 31 1903. Since then the mail for area residents has come from Esbon.

Clement was born in Thayer County, Nebraska, in 1873 but the family soon moved to Superior. He was 14 when his father died. He left home, moved to Jewell County and learned to be a farmer. Dora Belle Thompson became his bride in 1898.

After his stint as Dentonia postmaster, they moved to Ionia and then to Mankato in 1917. He lived in Mankato for 34 years, 16 of which he was the Mankato city marshall. After his death on Oct. 28, 1951, he was buried in Mount Hope Cemetery. Dora Bell was buried beside him after her death on Feb. 24, 1962.

Today one can drive by the I Road and 30 Road intersection and not realize the area was a busy little town in "the early day." Just a few still remember...