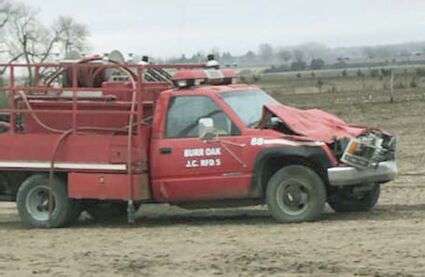 This Burr Oak Fire truck was badly damaged when it was involved in a collision while fighting prairie fire between Burr Oak and Guide Rock last Tuesday. Fourteen volunteer fire departments helped fight the blaze that burned approximately 10,000 acres.

Several people found it difficult to be where they needed to be to fight the fire last Tuesday because of the smoke and fast moving flames. Jon Thompson was one of the many firefighters who had a scary experience.

Jon and Mike Harris were manning a 1,000 gallon water tank. When the tank was empty, they headed back to Burr Oak on the highway where smoke and flames were crossing the highway.

Once the tank was filled Jon went back to the fire by himself. Because the fire and smoke were so bad on the highway north of Burr Oak, Jon decided to go back on a dirt road he had driven on earlier on...