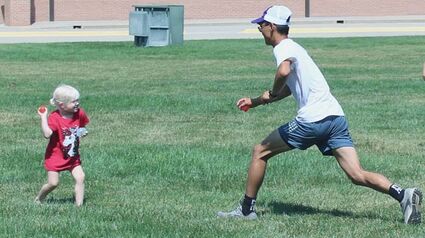 No mercy was shown because of age or size during Monday's FFA water balloon war held at Superior elementary School. The object was to hit an opposing team member with a balloon forcing them off the field. The games went on despite some obvious size and age mismatches. All's fair in love and water balloon wars.

The Superior FFA Chapter added to the Fourth of July Festivies by holding their annual Water Balloon Wars. A few members showed up an hour early to help set up for the event, which took place in the field east of the school. Six teams competed. Those teams were The Little Rascals, The Little Firecrackers, Water Proof, Super Soakers, The Bigger Picture, and the Menkes VM. The game was motr closely related to a game of capture the flag than regular water balloons, Only the flags were baseball bases a member snatched from the nearby field.

After each team played each other they would be place...