Ghost town of Otego had a short-lived high school

The ghost town of Otego, Kan., had a high school. Likely one of the lesser known of the 16 Jewell County high schools. Otego High School existed, perhaps as early as 1903, and continued until the 1919-1920 school year.

The post office, town and Otego School District No.157 were located in the NE 1⁄4 of Section 5 of Limestone Township. Today this is the southwest corner of the intersection of S Road and 90 Road. An old elevator and a couple of buildings are all that remain of the once bustling town. One of those buildings, pointed out by Edgar Marihugh, on the main street of the old town, was a lumber yard that served many years as the Otego Post Office.

It was a "busy, bustling little town" and a "young and thriving city" according to the June 28,1888 Jacksonian.  Why?  The railroad arrived!  Though the town is gone, trains still roll through the old townsite.

Otego was a "railroad town."  The town, on the main line of the Chicago, Rock Island and Pacific Railroad, was an important point between Kansas City and Denver. The steam engines needed water and there was not enough water in the wells near the town so a dam was built on White Rock Creek.

According to Oren Underwood, the water had to be pumped about a mile and a half but it provided water for the engines. The town was the main watering point on the railroad from 1913 to 1932. There was also a large stockyard in the south side of town and "a lot of cattle were shipped out of Otego" according to Underwood.

The townsite was platted and the first buildings erected in August of 1887 and Otego was "busy, bustling, young and thriving" by June of 1888. There was a drug store, hardware store, hotel, blacksmith, a wagon store, a church, a restaurant, a livery, two grain dealers, a grocery store and a millinery within a few short months.

But it was actually Eleon that was platted in August of 1887. Before that, Eleon had first been named Case after Mrs. George Case. Why the change to Eleon is not known. Another Kansas town had been previously given the name of Eleon and that resulted in the following announcement, in the Jewell County Review of Oct. 6, 1887.

"In order to get a post office" the name Eleon had to be changed. "The name of Otego has been sent up by the town company." Why Otego? Another mystery of history. This information comes from Otego Memories by Wilma Underwood and Phyllis Dethloff

Prairie Jewels (Jeri Shute and Erma Dillon) gives the population as around 300. Otego Memories grants the town a high population of 500.

Otego School District No.157 was organized on Oct. 4, 1888, about 14 months after the first building was built in what was to become Otego.  The petitions for organizing the school may be found in the registrar's office in the Jewell County Courthouse.

The first school was a one-room school, planned and built for 60 students. In 1906, the town built a two-room school. School records in the Jewell County Registrar's Office show two $400 bonds were sold and used to build the building. It was built on Howe Street in the southwestern part of Otego.

When the 1906 building was torn down, the last school, a brick, two-room school with a full basement was built. According to stories told Oren Underwood by his father, the late Delbert Underwood, the new brick building was never a high school. It only served grades one through eight.  Delbert Underwood also told of getting ready to go to school in the fall of 1922 only to have school start two or three weeks late because the new brick building wasn't finished.

District No. 157 began in 1889 as a school of eight grades and ended with eight grades when it closed in 1942.   The district was officially disorganized on March 1, 1947. The brick school, the last school in Otego, was torn down in 1954 by the Underwood brothers, Delbert, Wayne, Eber and Philip.

But there was a time, a relatively short time, between 1903 and 1920, that Otego had a high school. In the Jan. 15, 1903, Jewell County Monitor, two items mention a high school in Otego.  In one, a Miss Olson had 40 students and offered a "general common and high school course."

The other item, in the same paper disclosed "Mutt Detour and Ed. Olson are attending the high school at Otego." The next mention of Otego High School is in the Oct. 19, 1911 Jewell County Monitor which notes "Ionia base ball team has matched a game with Otego high school." In the 1913, 1914 and 1915 area newspapers there are several items about the high school.

Of special interest is the May 15, 1913, Burr Oak Herald which announced "The commencement exercises for the Otego High School will be held in the M. E. Church, Thursday evening, May 22."  Another item in the same paper adds more information.  "Rev. C. E. Tinker will deliver the baccalaureate sermon for the Otego high school, Sunday evening, May 18, at 8 o'clock."

The article goes on to say there were four graduates; Eva Siley, Edgar Eliff, Hazelton McMullen and Glenn Rhoades. Further those students had the "distinction of being the first class of graduates ever turned out by the high school of Otego." Records indicate these students graduated from a two-year course of study.

No newspaper items or articles mention an Otego High School graduation for those two years. But there was a common school (eighth grade) graduation announced in the June 7, 1917, Burr Oak Herald.

However, two newspapers carry items about a 1915 commencement at Otego. The Jewell County Monitor from May 27, 1915, has a lengthy article about the event. The graduation ceremony is detailed, listing the graduates as Gladys Underwood, Mildred Wiggin and Glenn Rhoades, their part in the program, the speaker, E. D. George, and the school board members, Henry Bunker, A. C. Bennett, and S. E. Rhoades.

The article specifically says "The class of three graduated from a 12-year course of study." Principal Sarah Colson is lauded for having "built up the schools from one room to three, and broadened and enriched the course of study." Colson had been principal for five years. 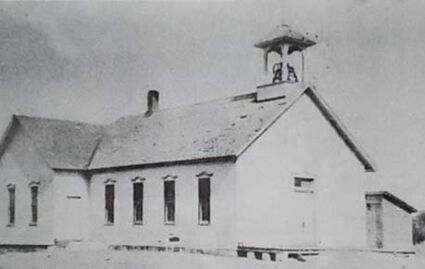 This school building, constructed in 1906, housed Otego School District No. 157. It was used until 1922 when a brick building was erected. For nine years, 1911-12 to 1919-20, the building housed not only the lower eight grades but also Otego High School.

The Jewell County Monitor from April 29, 1915 announced the editor of the paper had accepted the invitation to speak at the Otego High School Commencement. Further "Sarah Colson is the principal and they have 12 grades."

But by the 1920-1921 school year, records note only one teacher for District No. 157 and no notation of a high school. When the Randall Enterprise of April 13, 1922, listed the "Ten High Schools of Jewell County," Otego is not on the list.

Otego High School's history spans from 1903 to 1920, with documentation for only the nine school years between 1911-12 to 1919-20. There were only three known graduates in the Class of 1915 but they and Otego School District No. 157 are part of the fabric of Jewell County History.