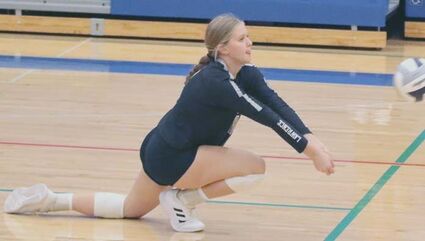 Emily Troudt, Lawrence-Nelson, gets down low to bump the ball, last Tuesday at the Kenesaw Triangular.

The Lawrence-Nelson High School volleyball team won their two matches at the Kenesaw triangular last Tuesday. The Raiders downed Harvard, 25-8 and 25-16, for a two-set sweep. They required three sets, 25-13, 17-16 and 28-26, to put away Kenesaw. The Shelton Bulldogs made short work of the Raiders, Thursday, at Shelton, with a three set, 9-25, 20-25 and 15-25, sweep. Lawrence-Nelson played Fillmore Central and Thayer Central at a triangular match hosted by Fillmore Central at Geneva. Match results were unavailable at press time.