On Friday, Aug. 5, just as Luna Jean Combs was turning 21 months old, she was rushed by ambulance Bryan Hospital's emergency room in Lincoln, Neb., to the pediatric intensive care unit of Children's Hospital in Omaha. She was diagnosed with advanced hepatoblastoma, a rare childhood cancer of the liver. Hepatoblastoma is a rare tumor that originates in the liver cells.

The treatment plan was to try and shrink the large mass with six chemo treatments. After the fourth treatment, she would be re-evaluated and a decision made to either do a resection to remove the mass and a portion of her liver or a liver transplant and then complete the other two chemo treatments.

On Monday, Oct. 3, she had another CAT scan. It was determined she needed a transplant because too much of the liver was involved and the tumor was still too large to resection.

She was placed at the top of active transplant list at 5 p.m. on Monday, Oct. 3. At 3 a.m. on Wednesday, Oct. 5, her parents received a call reporting a liver was available. Her family went to Omaha expecting surgery to be performed only to learn about 7:30 that night the donor liver was not viable and they should take Luna home. On Friday another 3 a.m. call came asking that Luna be returned to Omaha as another liver was available.

About 6 p.m. Saturday, she was taken to surgery. Thankfully, that surgery was completed.

Luna is a little warrior and continues to fight the battle. However, the journey is expected to be long. At this time the new liver is functioning and there are no signs of rejection.

Family members report they have been humbled and are grateful to everyone who has sent prayers, provided emotional support and financial help. They have been amazed by the generosity of many people.

Luna was in a critical state for such a long time snf her parents have not been able work regularly. While she was in Omaha. they stayed in her hospital room 24/7. In late September, she was able to return to her home in Lincoln off and on but because of her medical condition, one of her parents had to be with her at all times. In addition, they had to frequently return her to Omaha for blood transfusions, CAT scans, chemo treatments and various other things. Her parents tried to take turns going to work. 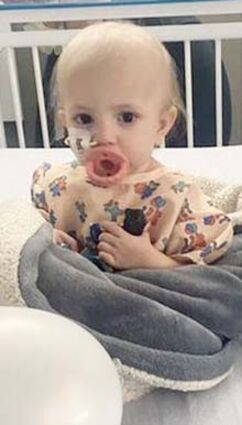 She has a 7-year-old brother who is attending school in Lincoln. Courtnee's mom, Carmen Dibbern, fortunately lives in Lincoln and was able to care for him at night and take him to school each day. As she does not get off work until 5 p.m., either Mikey or Courtnee drive from Omaha to Lincoln and pick him up from school. When Carmen gets off work, she picks him up and the parent who brought him from school returns to Omaha.

Luna is being termed a "Butler Miracle." Superior residents and family members, Ferne Butler and Tami (Butler) Lemke, both have undergone successful liver transplants. Luna is the third one in the family to receive a transplanted liver.

The family hopes when the donor's family finds out their loved one's liver saved a young child's life, it will give them comfort and ease the pain of their loss.