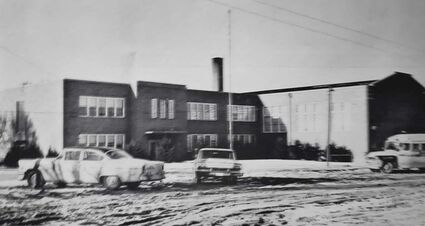 The fourth and last Lovewell High School. The building was built in 1949 and served the district until it closed in 1962. Three other high school buildings had proceed it in the 47 years Lovewell High School served area students. Photo from the 1962 Bulldog.

Lovewell is located near the center of Section 22 of Jewell County's Sinclair Township. That section is bordered by V Road on the north and U Road on south, 290 Road on the east and 280 Road on the west. A grade school, Lovewell District No. 150, was organized on Sept. 10, 1883, just to the west in Section 21. The school was moved into Section 22 in the town of Lovewell in 1888.

From a newspaper report for the 1890-1891 school year, the Lovewell School had 51 students enrolled with H.E. Smith the teacher. (Nov. 20, 1890 Jewell County Review).  Reports about the school continue with enrollments varying from 37 to 52 students.

Three newspaper items in the winter and spring of 1908 mention Lovewell High School. The first, in the Jan. 9, 1908, New Era, relates the teachers of Lovewell school were having "night school for the eighth and ninth grades." This seems to indicate Lovewell High School had at least a one-year high school curriculum.

The April 3, 1908, Courtland Journal notes the "Lovewell high school boys came down to play ball at Laurell(sic) Hill."  The Courtland Register of May 1, 1908, praised Miss Anne Powers for her "very successful term as principal of Lovewell High school."

No commencement exercises were announced for 1908 but the May 6, 1909 Jewell County Monitor carried an article about the "second commencement" at Lovewell High School. The article stated there was one graduate in the Class of 1908.

From yearly articles, it is known the commencements continued until 1913. Records housed in the Jewell County Courthouse document that 24 students graduated from Lovewell High School between 1908 and 1913. Those same records note the high school had a two-year program.

Things changed in the summer of 1913. Mont Green was awarded a contract to build a new high school building for Lovewell. The cost - $5, 850.00. (July 10, 1913, Jewell County Monitor) The building Green built was the Sinclair Township High School, the first township high school in Jewell County.

The Lovewell Index of Sept. 5, 1913, described the courses in the four-year curriculum that would be taught in the Sinclair Township High School. The building was dedicated Dec. 12, 1913. (Dec. 19, 1913, Jewell County Republican)

It was in May of 1915 when the first graduates received their diplomas from Sinclair Township High School. ( May 14, 1915 Lovewell Index) The eight graduates in the Class of 1915 were; Dora Boyce, Chloris Edom, Nina Peters, Charles Platt, Harold Platt, Harold Shaver, Oren VanMeter and Zetta VanMeter.

The school records in the courthouse show the bonds were paid off in 1917. That is also the last record the courthouse has available about the Lovewell school district.  The remainder of historical information comes from newspapers.

We know the school grew. The Sept. 16, 1920, Burr Oak Herald announced the largest enrollment in the school's history.  Then disaster - on Nov. 12, 1920, the relatively new high school building burned. "The worst fire in the history of Lovewell...our beautiful high school building together with nearly all the equipment was burned." ( Nov. 18, 1920 Western Advocate)

The March 21 New Era carried an announcement that the board of education of the Sinclair Township High School wanted bids "for the reconstruction of the building recently destroyed by fire. Mont Green, who built the destroyed school, was awarded the contract for the new building." ( March 10, 1921, New Era)

By the fall of 1921 the new building was in use and "a better building than the one that burned" according to the Sept. 1, 1921, Western Advocate. The Oct. 6, 1921, Western Advocate added the school was "beautifully located just south of the little town." John Ross (Mankato), a 1955 graduate of Lovewell, remembers the high school on the hill and the roads that circled to it.  He was a grade school student in the building.

But Ross graduated from an even newer high school building. The district secured bonds during WWII to build a fourth new high school but they didn't construct the building until 1949, after the war was over. This building served the district until it closed in May of 1962.  It still stands – crumbing slowly into history.

Though not the smallest or largest and sadly the last, the Class of 1962 went out with a bang. The red and white, six-man Bulldog Football team was undefeated. The players were Keith Webber, Doug Warren, Daryle Rothchild, Delmer Rothchild, Dave Lovewell and Raymond Aurand.  The coach was Bob Harris assisted by Gene Stensen. They outscored their opponents (Reynolds, Neb., Jewell, Hardy, Esbon, Aurora, Ruskin and Montrose) by the combined score of 255 to 40.

Doug Warren, now of Formoso, was the fullback on the team. Though all members of a six-man team can carry the ball, Warren carried it a good deal of the time.  With only six players on the team, all members had to play each and every down. The team was never defeated, but had to forfeit the last game because of an injury.

In six-man football, if the winning team is 45 points ahead, a game is "called."  Most games during the fall of 1961 were "called" because Lovewell High School was literally running over their opponents.

Those days are 60 years in the past and the school is closed. But though the school closed, the LHS Alumni Association continued to meet. The organization, started in 1928, met yearly for an annual "Lovewell Alumni Banquet." Until this past year.

The Lovewell Alumni Association met for the last time on Saturday, June 4, 2022, at the Buffalo Roam in Mankato. This was the 94th Annual Lovewell Alumni Banquet and was held 60 years after the high school closed. 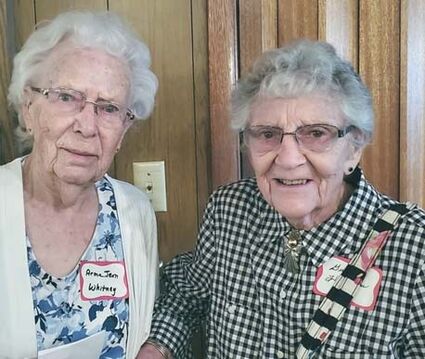 The two oldest living graduates of Lovewell High School are (left) Arma Jean (Ross) Whitney, Superior, Class of 1946 and Gwendolyn (Stratman) Hendricks, Alma, Kan., Class of 1943. Both women were in attendance at the 94th and last Lovewell Alumni Association meeting held on June 4, 2022 in Mankato, Kansas.

Though there were some 50 in attendance at the gathering, only about half were graduates of the school. Others were spouses, children or guests. With the last class graduating 60 years ago, there are fewer and fewer living graduates to celebrate the Red and White, Lovewell High School Bulldogs.

The gathering did not focus on sad but on happy memories. Mariam Lovewell Simons (Superior) a member of the Class of 1957, commented on those "great times" as she made the motion to disband the organization. The motion was seconded by Class of 1961 Raymond "Butch" Stratman (Clay Center, Neb.). There were no votes in opposition and a long time Jewell County organization came to an end.  Fading memories are all that remain of Lovewell High School 1915 – 1962.