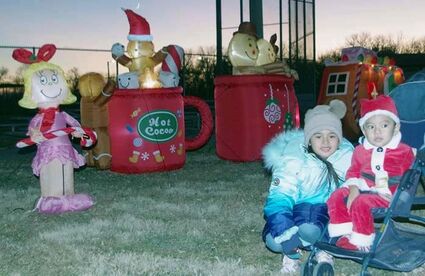 Axel Tadeo (2) arrived in his stroller at Candy Cane Lane dressed as Santa. Naomy Jimenez (6) joins him in front of a line of new blow up Christmas decorations in front of the Scout Cabin. As visitors waited for the hay rack rides, it was common to hear them talking about the Santa who opens the door and checks on his surroundings from one of the ornaments.

Two teams of horses arrived in Superior more than an hour before Candy Cane Lane's first hayrack rides of the season, Friday evening.

The teams are perhaps some of the best trained teams in Nebraska.

One team, owned by Jerry Mousel, was driven by co-teamsters Larry Jerkins and Hayley Boon.

Some standing near-by may have considered Boon, a high school student, inexperience. However, this summer she took second place in obstacle competition with a team owned by her grandfather.

"She lives next door and has always been interested in horses," he said. "She's gotten to be a good driver....