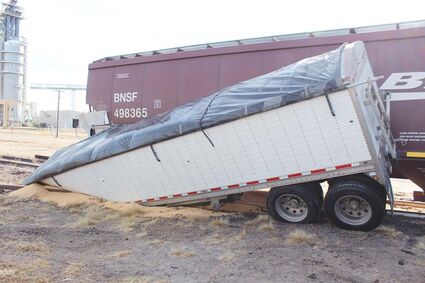 The aftermath of a chance meeting between a BNSF empty hopper train and a grain trailer at the Aurora Co-op Superior East facility crossing Friday. No injuries were reported. The trailer was a total loss while the grain hopper derailed.

There was unexpected excitement in Superior Friday morning when the Superior Fire and Rescue Departments were called to a truck-train accident near the eastern outskirts of Superior. An area truck driver, who was hauling corn to the elevator, had the truck's trailer struck while crossing the Burlington-Northern-Santa Fe Industrial siding and the result was a much shorter grain trailer than when he started his trip.

The BNSF was pushing an empty hopper train onto the former Wymore line east of Superior. The former Wymore main line track now serves as a siding along the south side of Hig...