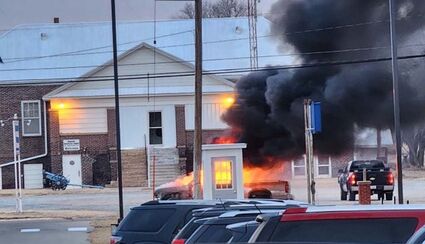 Members of the Superior Volunteer Fire Department responded to a vehicle fire on West Eighth Street in Superior at approximately 8 a.m. last Wednesday morning during the "school rush hour." Ja'Coby Beck, a student at Superior Public Schools, was close to his destination when his pickup caught on fire and he was forced stop. No one was injured in the incident.

As the students arrived for the start of the school day, one of the students had the misfortune to have his ride catch on fire.

The driver, Ja'Coby Beck, stopped his vehicle on Eighth Street near the entrance to the American Legion Hall parking lot.

Marty Kopza, superintentdent of the schools, was one of the first to observe what was happening and ran to assist.

The fire appeared to have started in the engine compartment and spread to the truck's cab.