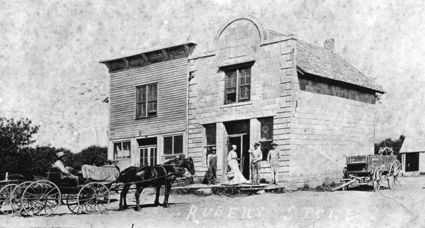 This is a post card picture of Rubens Stores in 1908. The remains of Rubens was covered by water when Lovewell Lake was filled.

John's Creek meanders north through Jewell County's Richland Township. It was doing so 150 years ago when the first permanent settlers were establishing homes in Jewell County. At that time, White Rock Creek flowed eastward across the breadth of Jewell County.

Near where the two creeks came together, the town of Rubens flourished during the late 1800s. It began on Jan. 31, 1871, when the Rubens Post Office, named after the first Rubens postmaster, William Rubens Scott, was established. The first home in Rubens was a cabin built by William Scott, Samuel Sweet and Willis (Wilson) McBride....