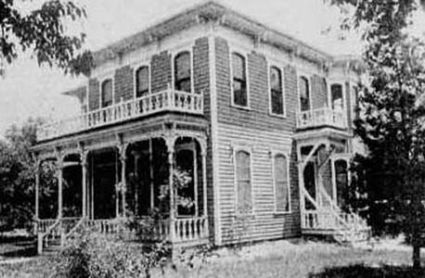 This is a 1910 photo of the J. S. Fisher residence in Jewell. It is believed the home was constructed in 1884 and is the oldest home in Jewell. The Fishers lived in it as did the Bob Nulty family. It is currently owned by Gavin Colson.

"Jewell – We've Got A Story To Tell" and one story is about the house on the southeast corner of Main and Sheridan. It is thought to be the oldest house in the community. Records and newspaper items point to it being built in 1884 by J. S. and Susan Wise Fisher. The Fisher's were from Rock Grove, Ill., and moved to Jewell around 1883.

The Fisher's first visit to Jewell was recorded in the Sept. 8, 1882 Jewell County Republican. He and his wife, in the company of a sister, brother and sister-in law, came to visit "their numerous friends and acquaintances." The group stayed about ten days before September 18, 1882 paper reported they "departed for their home."

The item also noted that J.S. Fisher owned a quarter of land east of Jewell. Already owning land in the area would seem to indicate that Fisher had been to Jewell before.

Other items indicate he continued to purchase area property. In December of 1885 he bought the Parmenter quarter in Prairie Township. The December item noted Fisher "had an abiding faith in Kansas soil and was not afraid to put his money into it." He purchased more land in 1898, owning property both south and east of Jewell.

Mr. Fisher returned on several occasions to Illinois for "business" or to "settle his sister's estate." Items hint he had considerable property and business in Illinois. Here in Jewell he had several farms. Also, he and later his son, Emerson D. Fisher, owned the Fisher Lumber and Coal Company. The business was located where the Jewell Apartments now are.

But it is in the Nov. 7, 1884 issue of the Jewell County Republican, that tells about their home. "The Fisher residence shows up handsomely as it nears completion." Then in the November 21 edition, the claim is made "The Fisher residence ranks second to none in the city." The family had "taken possession" is noted in February of 1885.

The couple made changes and improvements during the time they lived in the home. In 1887 a fence was put "around the premises." In 1893 a "stone walk" was put on the north side of the home and it was repainted with a "city look." "A new and brighter hue" of paint was used in 1904. But in 1908 the home was given a new roof and an "enthusiastic" Fisher celebrated the election of Taft by painting that roof a "brilliant red."

The Fishers, and sometimes their only surviving child, Emerson, lived in the home until the senior Mr. Fisher died in January of 1915. He was buried in Wallace Cemetery in the "new family vault." After his death, Sarah lived mainly with her son or a granddaughter until her death in 1923.

Various families lived in the home in the ensuing years. The J. C. Latto's, the O. N. Berry's and the B. M. Palmer's were among them.

An extensive remodeling project was started in February of 1923 by Emerson Fisher. Porches, a bathroom and oak floors were among the improvements. The bay windows on both floors of the home were retained. It is likely the porch on the west side of the home was added at this time. Originally the home faced the north and a porch and main entrance were on that side of the home. 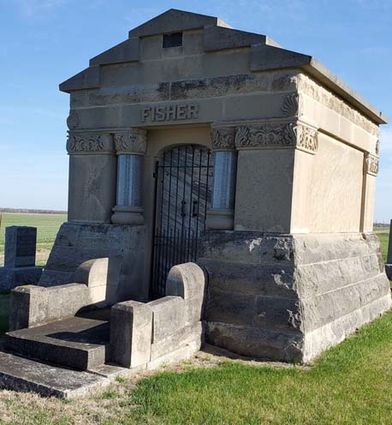 J.S. Fisher and Sarah Wise Fisher are buried in this vault in Wallace Cemetery. The Fishers built the two story home on the southeast corner of Main and Sheridan in Jewell. It is thought to have been built in 1884 and to be the oldest home in Jewell.

An open oak staircase leads to the second floor. There are four upstairs bedrooms - with closets!

Aside from Fisher Lumber and Coal Company, Emerson Fisher is best known as being mayor of Jewell. He held the position for 14 years. During his tenure as mayor, the waterworks were put in and the dam built. Lake Emerson is named after him.

Sometime after Emerson Fisher remodeled the home, J. R. "Bob" Nulty acquired it. Nulty was the manager of the Jewell Lumber Yard so another lumberman lived in the home. Several community members remember Nulty living in the house. His grandson, Mike Nulty and his wife, Marcia, still live in Jewell.

The home is currently owned by Gavin Colson of Jewell. Though it stands empty at the present time, after 136 years, it still stands. It has silently witnessed the vast majority of Jewell's 150 years of stories.

Information for this article was obtained from Ancestry.com, Newspapers. com and research done by Becky Loomis, Nita McChesney and Sharon Tullar.