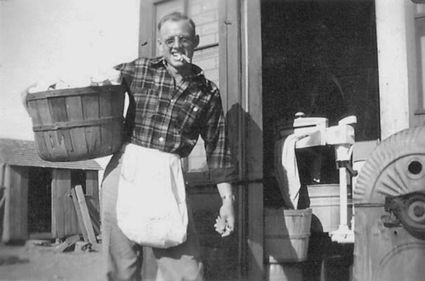 The late Gerald Boyles shortly after Gloria (Boyles) (Garman) Schaefli was born. He had returned home from WWII and was helping his wife with household chores.

It's cherry picking time! The only problem is I don't have any cherry trees to pick from. Several years ago a cherry tree start was ordered from a seed catalog. After selecting just the right spot, the start was carefully planted, watered and tended. I could imagine all the cherries this tree would yield in the future, and all the cherry pies that would be made, but alas. The second year of its growth, the tree died.

Thankfully a couple of years ago, a good friend gave me some cherries that had been picked and sacked. They went in my freezer and throughout the winter months the cherries were made into delicious pies.

Recently I read there are fruit orchards where a person picks the fruits off of the trees, including cherries, but they were all in eastern Kansas. They advertised bringing the family to the gardens to pick together made for great family time. Not wanting to travel that far for my cherries, and not thinking my "family" would go for this kind of "family time," this suggestion didn't go far.

Memories of years ago as a young mother when a friend's brother told my friend and I there were two cherry trees on his property filled with cherries we could have for the picking. My friend and I grabbed buckets and ladders and headed to the cherry trees. The trees were at an abandoned farmstead with a pathway leading to the trees. We lugged the buckets and ladders to the trees and began our efforts. Within two hours we each had two buckets filled to the brim with the bright red cherries. The next day the cherries were rinsed off. Then it was time to do the hardest and messiest job - pitting the cherries. I had learned the hard way from pitting cherries in the past, to wear old clothes and to be stationed on the porch as when getting the pits out, the sticky cherry juice would fly everywhere. There is a certain way getting the pits out without losing too much juice and without doing a lot of damage to the cherries. The cherries were, pitted with the pits falling into a bowl placed on the lap of the pitter. Then the pitted cherries were dropped into another bucket placed on the porch floor near the chair.

After the pitting was completed, it was time to take the cherries into the kitchen sink to examine for the tiny worms that sometime are inside the cherries and to get rid of any stems or leaves missed while pitting. The cherries were then placed in freezer containers, with each container filled with enough cherries to make a good sized pie. After they were placed in the freezer, it was clean up time. The porch floor and chair had to be hosed off and clothes had to be changed. After washing your hands several times, you knew that the stains from the cherries would remain on your hands for a few days to come.

I remember the first time pitting those cherries my friend and I had picked. My sons offered to help pit but that didn't last long as they had imagined they would taste like the sweet Maraschino cherries. Instead they were sour cherries! I have never seen such puckered faces after they placed a couple of the cherries in their mouths.

For a couple more years my friend and I continued to pick our cherries from her brother's trees but in time, the trees yielded less and less, and eventually died.

Checking online to see if cherry picking is still done, most of the articles are about professional fruit producers and the cherries of today are used for more than just making pies, jellies and desserts. They are dried, used in the making of juices and wines and jerky. Somehow cherry jerky just wouldn't fit in my menu ideas. There are many varieties of cherry trees offered, such as Romance, Crimson, Passion, Balaton, Cupid, Jullet and Valentine. It was also said one standard size cherry tree should yield 30 to 50 quarts of cherries a year.

For me, cherry pies are the best use of sour cherries. Here is a tried recipe for fresh cherry pie, just in case you are lucky enough to have some of those cherries fresh off the tree.

Stew the cherries with the sugar, flour and salt until soft and the juice thickened. Add almond flavoring and taste for sweetness. Some cherries require more sugar than others.

Fill a pie shell with the cherry mixture and cover with the top crust. Seal edges. Cut top to let steam escape. Bake in a 425 degree oven for 10 minutes. Reduce heat to 350 degrees and bake for a half an hour longer.

This pie is extra delicious when served with each piece topped with home made vanilla ice cream.

Recently I was going through photos of many years past and came across one that shined a whole new light on my dad. He is standing in the closed in back porch of the first farm house my parent's lived in, north west of Burr Oak. He had only been home two years after serving in WWII as a corpsman. He had served during the battle of Iwo Jima. In the photo he had a big smile on his face and is holding a wooden bushel basket with a plastic lining. The basket is filled with what looked like white diapers. He is holding wooden clothes pins in his mouth. Behind him is a wringer washing machine. The most unusual thing about this photo is he was wearing an apron around his waist. After seeing the date on the back of the photo, I figured out it was taken the year and month I was born. I suppose he was helping my mother by doing the washing.

I smiled as I examined this photo, as I had never seen Dad doing laundry before except after my mother died. Having three daughters and a wife, Dad never had to do the laundry and, of course, he was kept busy farming and doing the livestock chores. I'm sure if he was needed to do the laundry for his family, he would have but it was never called for that I know.

What a special father photo! Miss that special man and I'm so glad that my mother thought to take the photo. I hope all those who still have their father with them will be celebrating Father's Day with them in some way.