Mom surprised to see her son

Little did Sonia West know what was in store for her when she arrived at Superior Elementary School Tuesday morning to teach her first grade class. It was a regular day until recess at 11:30.

Doug Hoins, principal at Superior Elementary, joined in on the surprise. He met Avery and Rick at the east door of the elementary at 11:30 a.m. Then he walked them around to the playground where Sonia had recess duty. Mr. Hoins distracted Sonia so her son could sneak up behind her. When she turned around and saw her son, she jumped into his arms. Mother and son embraced each other with tears of happiness. Avery's father, Rick, stayed in the background filming the surprise. 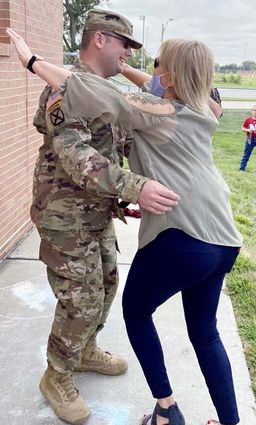 Tuesday morning during recess, Sonia West, a Superior elementary teacher, got a huge surprise. Her son, Avery, who had been stationed in Iraq, greeted her. She had no idea he was in the States.

Rick and Avery had been planning the surprise for a few weeks. Neither of them told Sonia Avery was in the States. From Iraq, he went to Texas until he came to Nebraska Saturday. Sonia was lead to believe Avery was still in Iraq. Monday Rick made arrangements with the school so Avery could make an appearance while the students were at recess.

Avery joined the Army in 2018 while he was enrolled at the University of Nebraska at Lincoln in classes for a forensic science degree.

On Oct. 18, he was deployed to Iraq and has been stationed there until he returned to the States. Avery is an ammunition specialist in the Army.

When Avery was asked about the sights and what he did in Iraq, he said, "There wasn't much to see but sand and the base he was stationed at." Because of COVID-19, they were not allowed to leave the base. During his nine months in Iraq, he was on guard duty and inspected ammunitions. He also saw a great deal of YouTube when he was off duty.

Now that Avery is back home,he plans to enroll at UNL this spring.