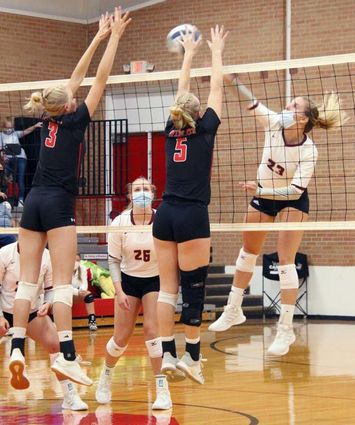 Alexa Cox (3) and Sierra Blackburn (5) block the ball to the masked marauders of Bruning-Davenport-Shickley at Superior, Thursday.

The Bruning, Davenport, Shickley Storm volleyball team came to Wildcat territory on Thursday, Sept. 10. It was a very tense and exciting match to watch or listen to on KRFS Radio with Cory Kopsa's coverage. The first set seemed like a marathon. Both teams fought very hard, B-D-S won in four sets: 33-35, 25-20, 25-21 and 27-25.