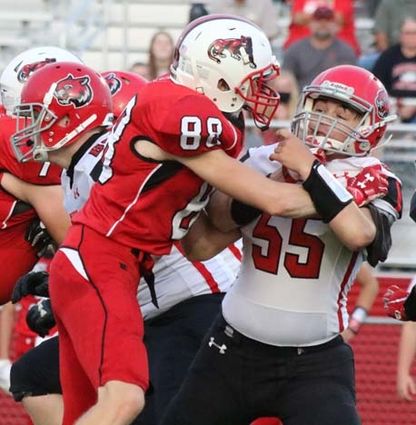 Luke Jameson (55) is tangled up with an opposing Sandy Creek player during Superior's game Friday at Sandy Creek.

Friday, the Superior Wildcats went north to Sandy Creek to take on the Cougars.

In the first quarter, Sandy Creek scored first on a Rodney McDonald one yard run and point after kick.

Superior scored on a 42 yard run by Elijah Heusinkveltt. The point after kick failed. Score was 6 to 7. Next SHS scored on a 33 yard pass from Dane Miller to Zeke Meyer. The two point conversion attempt was unsuccessful. The first quarter ended with Superior leading 12 to 7.

Neither team scored in the second or third quarters. In the fourth quarter, Sandy Creek scored on a McDonald one yard run and another...