The Superior Wildcat offense is off and running with the snap against the Fillmore Central defense at Geneva, Friday.

Last Friday, Oct 2, the Superior Wildcat football team traveled to Fillmore Central in Geneva to play, and came home with a win.

Coach Heusinkvelt's said, "It was a great night to run the ball. We finally had the might we have been waiting for. The linemen did an amazing job blocking for Dane Miller, Elijah Heusinkvelt and Clayton Morris. We also gained some passing yards at key parts of the game to give us some first downs. Our defense played well at times, but we still need to not make key mistakes that ended up letting Fillmore back in the game. I am very proud of the team and their efforts."

Superior scored twice in the second quarter. Elijah scored on a one-yard run and a six-yard run. Both times the two-point conversion attempt failed. The second quarter ended, SHS 12, FCHS 6.

In the third quarter, Dane Miller scored on a 57-yard run. Elijah Heusinkvelt scored the two-point conversion. The score was SHS 20, FCHS 6. Fillmore scored on a 34-yard run and their point after kick was good. The score was SHS 20, FCHS 13. Elijah Heusinkvelt scored again on a two-yard run. Clayton Morris ran in the two-point conversion attempt. The score became SHS 28, FCHS 13.

Fillmore Central scored again in the fourth quarter on a one-yard run. The PAT kick was good. The score now was SHS 28, FCHS 20. Fillmore scored again on a two-yard run. Their two-point conversion attempt failed. The score at this point was SHS 28, FCHS 26. Superior scored again on a 28-yard run by Elijah Heusinkvelt. SHS's two point conversion attempt failed leaving the score SHS 34, FCHS 26 at the end of the game.

SHS player statistics are Dane Miller: completed three out of eight passes for 40 yards, ran 12 times for 101 yards, one touchdown, one fumble and three tackles.

Clayton Morris: rushed 13 times for 77 yards, 16 tackles, one tackle for a loss. 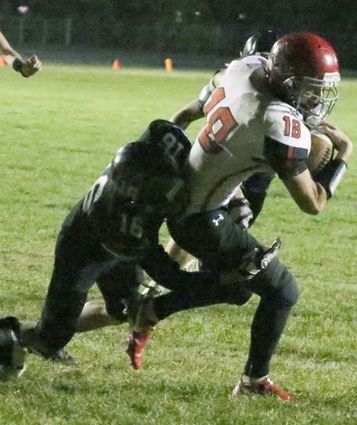 Clayton Morris (18) drags a Fillmore Central player for a few more yards for the Superior offense at Geneva, Friday.

Adin Humphries: seven kickoffs for 138 yards, one punt for 36 yards.

The Wildcats host Sutton next Friday, Oct. 9. It is Parents Night.