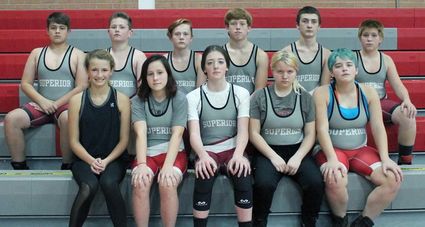 There are 11 Superior Public School students participating in junior high wrestling this fall: four girls and seven boys. After two weeks of practice they competed at their first meet Saturday.

Girls wrestling is not yet a sanctioned sport with the NSAA (Nebraska Schools Athletic Association.) It is deemed an emerging sport.

Seth Going, coach, expects it will become sanctioned and be handled much like girls basketball and boys basketball, but at this time they practice and compete together.

"Because of COVID, the meets look different this year," Going continued. "There is no shaking hands before the match. No raising of the hands after the match. The coach must wear a mask. Each wrestler sanitizes between matches."

District matches will look different too. The number of teams participating will be split for subdistrict competition to limit the number of people present at one time. Only four finalists will get to go to state. Our district had five returning finalist in the heaviest division last year, so this year one of those will be eliminated in subdistricts. One of those was from Superior.

" We will prepare to be one of the four," Going said.

Going is assisted by Brent Thomas.