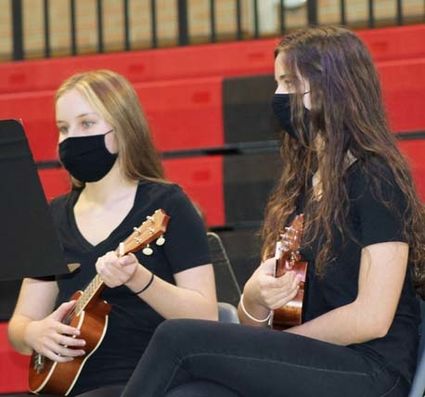 Because of COVID-19 protocols, attendance was limited to parents and guardians of the participants. The attendees were masked and practiced social distancing.

For band members, there were many adjustments to be made this school session. There was no pep band performing at football games this season. The decision was taken to eliminate wind instruments and concentrate on percussion and string instruments. This entailed many band members learning new instruments.

A change in plans then took place when instrument masks were ordered. Bell covers for the instruments and special face masks made the playing of wind instruments possible again. Filters are placed into the bell covers of the horns. The face masks have a slit in the middle. This matches with the mouthpiece of the instrument. A flap then goes over it to offer further protection. This form of protection allowed the band to perform. The choir wore masks and socially distanced for their performance.

The second session of school will allow the use of the masks. Allison White noted the groups could perform as they normally do if they followed the protocols set forth by the National Association of Music Education.

The band and choir were directed by Allison White, music and band instructor.