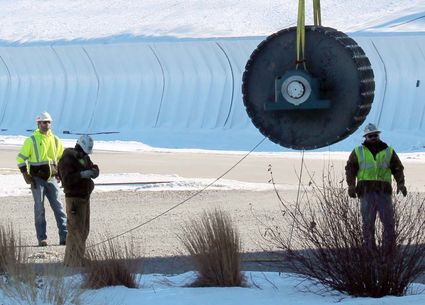 Eric Krotzinger (left), the Agrex superintendent, oversees the rigging and lift of a 6,000 pound headend pulley at the Agrex grain facility in Superior, Friday. The pulley was installed when the facility was constructed more than 38 years ago. It was refurbished on site by Agrex workers and placed back atop the elevator.

One had to crane one's neck to view the top of the crane at work at the Agrex grain facility located on the east side of Superior Friday. A crane from Patriot Crane and Rigging was on site to return a bulkhead, or headend pulley, to the top of the silo infrastructure. The lift point was 190 feet above the ground. The crane would extend to 240 feet to make the lift.

The pulley weighs 6,000 pounds. It was removed last Tuesday for preventative maintenance. It is equipment installed when the original elevator was constructed more than 38 years ago. After the pulley was removed, Agrex workers r...