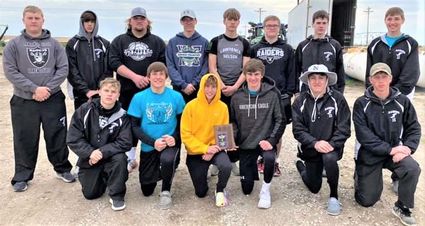 Team championships are tough to come by in the world of small school Track. However, the L-N boys' Raiders keep improving this season and at the Del Wick's Invitational last week, they were second out of the seven teams at the meet. They took time to have a team picture taken with their plaque following the event. They are from left (back row) Keaton Mazour, Evan Jacobitz, Chad Holcomb, Logan Menke, AJ Koehler, Rocky Miller, Ayden West, Nolan Ostdiek (front row) Gabe Zikmund, Tyson Kotinek, Devyn Zikmund, Cole Troudt, Erik Wheeland and Trevor Biltoft.

For those who don't know, the Del Wick's Track Meet in Deshler was named after the deceased newspaper publisher of the Deshler paper. He loved the sport and made arrangements for the Deshler School to sponsor the event, long after his death.

The boys earned four gold medals and four silver while the...