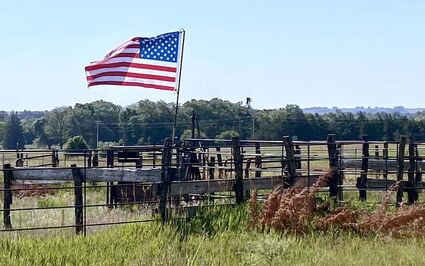 Old Glory flies from a catching pen south of Mike Ost's home and north of Highway 36 at the Ionia turnoff.

Nora Rhoades said preparations were underway for the Jewell County Fair which is July 8 through 11. She said there is a livestock agent position to fill.

Shannon Meier reported the building project is underway. He has some classes and meetings in July.

Don Jacobs said the jail is currently empty. The new patrol vehicle is in service. He attended certification training for the intoxilyzer.

Kevin Peroutek reported spraying for the noxious weed department. He has received several reports of infestation and will be sending warning letters. Chemical sales have been steady. He has worked on the local emergency operation plan and has a preliminary draft ready for submission.

Chris Petet said B-Green will be spray the courthouse yard.

Travis Garst said they had a state inspection, and everything passed. Themetal pit had been crushed. He has been working on permits and starting a new C&D pit.

Nancy Marihugh provided a COVID update. They have seen a steady drop in those receiving vaccines. They are getting "FIT" tested. She said the grant reporting is due by July 15. She has recertified by attending the Chronic Disease Management course. The department is working with the school on updates. They are also getting WIC program records up to date.

Alex Carabajal has completed her continuing education. She attended a meeting with Judge Cudney.

Carla Waugh said she continues to work on budgets. She has assisted some of the cities with the new SB13 requirements. She is also working to close out the Cares Act grant and a new security plan with the secretary of state's office.

Brent Beck said he continues to work on the budget and check roads and bridges.

Chairman Roe opened the public hearing for the CDBG Cares Act Close-out # 20-CV-035 at 9:00 a.m. with Brianne Beck, community development representative, present via telephone. Chairman Roe opened the hearing for public comment. Beck said she had received positive feedback from businesses receiving funds from the grant. There were no other comments. The commissioners signed the close out documents for the CDBG Cares Act Close-out # 20-CV-035.

The Preliminary Concurrence for the Local Emergency Operation Plan passed

Commissioners reviewed the 2022 budget requests and requested the county clerk submit them to the auditor.

Joel Elkins, general superintendent, reported on maintenance projects. It was reported more rock is needed on the road along section 15 of Ionia Township.

The Jewell County commissioners hosted the multi-county meeting at 25 Meadowlark Lane, Mankato. Mitchell and Osborne counties were present for the meeting. Commissioner Roe welcomed everyone to the meeting. He discussed a 4-day work week for R&B Bridge, floater employee for the courthouse and the Revenue Neutral Rate. The group also discussed how each county handles ACH payments and the housing market. The next meeting will be Sept. 13, hosted by Mitchell County.