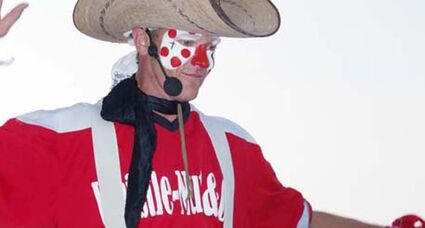 Whistle-Nut walks the top of the Nuckolls County Fair Rodeo arena fence like a tight wire with a portion of the grandstand audience in the background. During the rodeo intermission, an interior ring of pens were set in place, an iron extra-long teeter totter placed and a Mexican Fighting bull released into the pen. Issac Meyer, Superior, rode one end as Whistle-Nut rode the other to avoid being gored by the bull.

Members of the Nuckolls County Fair rodeo audience screamed as Issac Meyer, Superior, rode a bull teeter totter with Whistle-Nut, the clown, during intermission. A Mexican fighting bull attempted to gore first one and then the other as the pair barely rose above the bull's horns within an interior arena set up special for the event.

Whistle-Nut rode Ole, a retired rodeo bull, around the main areana early in the evening. The pair travel the world. Monday and Tuesday evenings they were at the Nuckolls County Rodeo.

Prior to the rodeo, a few curious, observant children petted Ole and, with...