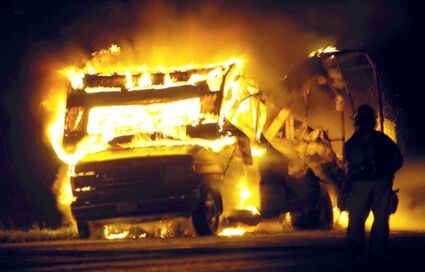 It didnʼt take long for fire of an undetermined origin to destroy a motor home near the north edge of Superior. After smelling smoke, the driver made the decision to stop as the vehicle crested the hill north of the Superior Municipal Airport buildings. The Superior Volunteer Fire Department was called to control the fire shortly before 9 p.m. The fire had spread from the vehicle in the ditch but was kept from reaching adjoining fields.

As Superior fire trucks raced north on Idaho Street about 9 p.m. Saturday, there was no second guessing the page from the Nelson Dispatch Center which had called them out.

Dispatch had reported a motorhome was on fire near the Superior Airport.

The sky was a blaze with fire as the flashing hazard lights from vehicles stopped on the highway punctuated the night.

Arriving on the scene the fire fighters found a 1993 Ford truck chassis with a Fleetwood motor home body was fully ablaze.

The owner, a Superior resident, was returning to town when smoke was detected. The vehicle was soon fully...