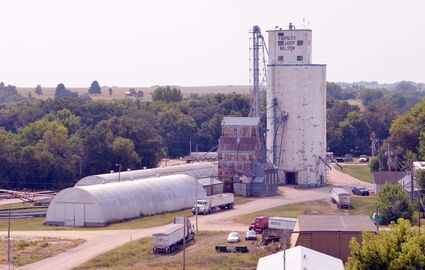 From high in a bucket truck, this view of Nelson was captured. During the SCPPD 75th anniversary open house, people were offered a lift in the bucket truck with one of the company's linemen.

Most of us in Nuckolls County have heard of South Central Public Power District. Many of us get mail from them each month. What I'd wager is that you didn't know they've been around since the Stone Age! The stone ages of electricity in rural Nebraska, that is. The electrification of cities began as early as 1880, but for us country folk, it took much longer. Only 11 percent of U.S. farms had electricity in 1935. Thankfully that year, the Rural Electrification Administration was created by President Roosevelt.

The goal of the REA was to bring electricity to America's rural areas. The R...