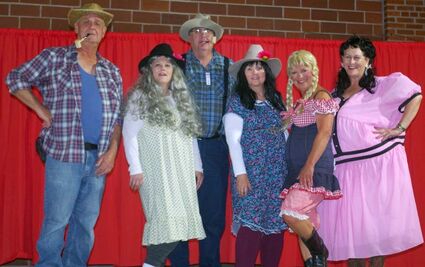 Local residents treated the variety show audience to an evening of quality music and entertainment at the Superior Auditorium, Saturday evening. Actors in the "Outstanding in the Field" act were (from left) Dan Lygrisse, Chris Hiatt, Rick Hiatt, Ged Leibel, Pat File and Laura Corman.

Beverly Beavers opened the variety show by thanking the many people who have worked tirelessly on the auditorium for several years so the facility can now be open to the public.

Lynette Bartley served as master of ceremony and kept the audience alert with jokes between events.

Rob Williams returned to the stage in Superior after many years of absence when he accompanied himself with a guitar as he sang "Act Naturally." He remembered attending danc...