Rubens, once a flourishing town, now lies under lake 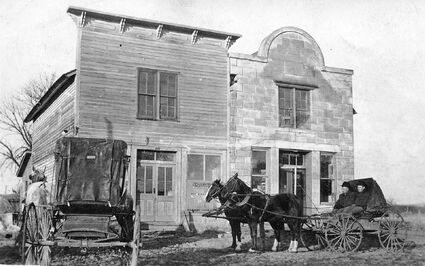 This photo was shared on Ancestry.com in 2011 by Mr. Davis. The family is that of O. S. or Oliver S. Rice. He was the "Pioneer Merchant" of Rubens. He served two terms as postmaster. His son, O. L. Rice also served as postmaster. His daughter, Olive, was the last to serve as postmaster of the Rubens Post Office. She closed down the post office when it was discontinued on Oct. 5, 1900.

During the late1800s, near where Jewell County's Limestone and John's Creeks come together, the town of Rubens flourished. Today that area lies under Lovewell Lake.

The first home in Rubens was a cabin built by William Scott, Samuel Sweet and Wilson McBrid...