Krayton Kucera battles several Kenesaw players for the ball last Saturday. Krayton is not always the tallest player in the game, but he is always one of the leading rebounds on the team.

"One step forward, and two steps back" gives a description of last week's L-N boys' basketball experiences. The lineup of games for last week was to play three D-1 teams. They were able to defeat old rival Rock Hills, Kan., but then ran into one of the better teams in the state when they played Kenesaw and then lost to Axtell as well. The game summaries.

L-N – ROCK HILLS: 46-16: The first game of the week saw the Raiders entertain Rock Hills, Kan. High School. (RH). L-N had little trouble with our southern neighbors as indicated by the quarter scores:

In the previous three wins, L-N played an aggressive game that resulted in the wins. They followed the same formula in this game and it worked well. Krayton Kucera, Conner Janda and Nolan Ostdiek accounted for the first period scoring for L-N. However, Coach Brown started playing the entire team before long and ten of the 12 players on the team scored at some time in the game with the starters getting a little less playing time and the non-starters getting more time. The Raiders recorded only seven turnovers for the game with the first period being errorless (no turnovers).

The boys recorded 42 rebounds, had 11 steals and only 11 fouls for the game.

L-N – KENESAW: 33-54: All of a sudden, the Raiders ran smack into one of the better Class D-1 teams in the area, playing Kenesaw (12-1). The Raiders matched up well for the first one-half quarter with the scoring being 3-4, but Kenesaw went 4-5 from the field in the last half of the period while L-N gave up a few too many turnovers to stay even.

The Raiders continued an aggressive game as had worked in the last few games, but Kenesaw also played very well and was able to extend their lead. The score by quarter:

L-N tightened their defense in the third period which worked well, but the shots just would not fall for the Raiders.

L-N had a good night at the charity stripe hitting 10 of 15 with Tyson Kotinek making 4-4 and Bayln Bargen making 2-2.

L-N led most of the first period with Axtell making their only 3-pt. shot of the game at the end of the period to take the lead.

A couple of turnover and fouls slowed L-N in the early 2nd period. However, the Raider defense kept the boys in the game as they forced Axtell into five turnover and limited Axtell to only 3-12 shooting. 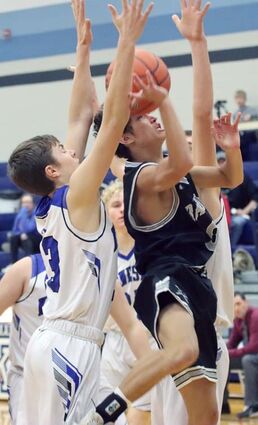 Bayln Bargen finds the going kind of tough as he attempts to get a shot off in the Kenesaw game last week.

In the second half Axtell had only one turnover and hit approx.. 60 percent of their field goal attempts while the Raiders had trouble prying the lid off the basket.

In spite of the score, there was the feeling that the Raiders were just about to break the game open. They cut the score to single digits a number of times, but could not get over the hump.

This week the boys travel to Odell on Thursday and the boys play the early game. On Friday they play Parkview Christian at York College and next Tuesday they will play at Blue Hill.