Members of the Superior Girl Scouts follow the color guard to open the 2022 Vestey Festival Parade. The wind was brisk under a clear, sunny sky and warm temperatures during the parade.

It may have been a bit breezy for some Lovewell Lake visitors but for most people the Memorial Weekend weather was perfect. Rains earlier in the week had helped to erase the signs of the winter drought. Peony plants were blooming on schedule and area cemeteries looked like well maintained gardens.

The U.S. Flags were fluttering in the breeze and showing their full glory.

The temperature was neither too hot or nor too cool, instead it was just right for most.

As the weekend came to an end, organizers of the Lady Vestey Victorian Festival were all smiles. Attendance was good at most all of the scheduled events. The parade lasted nearly 45 minutes. The three circus shows presented on Central Avenue wowed the audience. Food vendors had done a brisk business. The Rock-It carnival like games were a hit with the youngsters.

Visitors to the Superior Auditorium were pleased to see how the restoration of the old building is coming along.

For the Grill Games at the Superior Country Club the main parking lot and the driving range parking lots were full and vehicles lined the county road.

At 10 clock Friday evening downtown Superior had lots of parked cars, people walking the streets and the sounds of people enjoying themselves on the outdoor patios at Superior Bowl and the Flatwater Bar & Grill.

Thousands of people camped at Lovewell Lake and the thunderstorms predicted for the weekend did not materialize. Nuckolls County was included in a tornado watch for a few hours but the feared bad storm did not develop.

Much the same can be said for Jewell County where the people of Jewell opened their Farmers Market for the first time and the Mankato community celebrated the 150th anniversary of the towns founding. 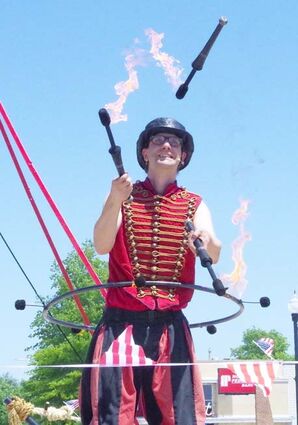 Juggler Peter Brunette juggles three fire-tipped batons as he whirls a fire-tipped hoop around his waist at an afternoon performance of entertain Polka Dot Entertainment, LLC, in downtown Superior the Vestey Festival.

As the weekend grew to a close comments from the visitors included "Mankato, thank you for an amazing weekend. Glad to call you home." and at Superior, "Nice parade, lots of fun events, delicious food, perfect weather, awesome vendors."

Each year there are unplanned events which punctuate the holidays. This year one of those was the Superior High School Class of 1972 entry in the Saturday morning parade.

As part of their 50th anniversary celebration, class members rode on a float and were followed by a classmate, Rick Alexander, driving a 1972 Ford Bronco displaying a large United States Flag. The parade stopped for few moments near the reviewing stand and the Bronco's engine died and then refused to start.

When it was determined the Bronco was not going to start, Rick called for pushers and four of the late Rick Johanson's grandchildren, Gradyn Pearson, Mason, Jubilee and Gunnar Johanson, came out of the audience along with Blaine and Cathy Hansen and pushed the balky vehicle to the finish line. Rick Johanson was a member of the Superior High School Class of 1972.