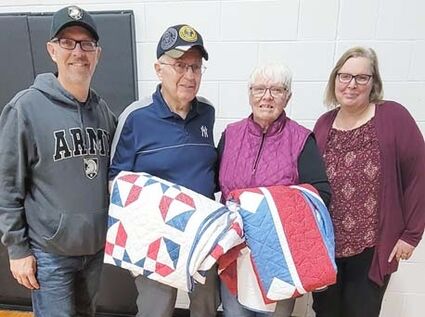 Dick and Marge Kohmetscher of Lawrence were awarded Quilts of Valor in a moving presentation during the Lawrence-Nelson High School program honoring veterans held on November 10.

The five girls who designed and constructed the quilts under the supervision of Kay Theer, their 4-H leader, voted unanimously to award a quilt to Army Veteran Dick Kohmetscher in recognition of his service to God, country, community and family. Since they had made two quilts, the girls decided that Marge, also a veteran as well as being a partner in Dick's endeavors, should receive a quilt of her own.

In introducing the honored recipients, Kay pointed out that in spite of the time and labor it has taken to operate Dick's Place in Lawrence for more than 50 years, the Kohmetschers still found time to devote to community endeavors.

Lawrence-Nelson High School again honored veterans and their families with a heartfelt and moving tribute led by teaching staff member Decker Brown. Following the presentation of Colors by American Legion Post 187, the National Anthem was sung by Valentina Koehler. Erik Wheeland, Thomas Safago, Tyson Kotinek and Trev Mueller reported on their participation in Boys State and Junior Law Cadet programs and thanked the American Legion for their sponsorship.

Every member of the senior class selected a word they felt described a veteran and explained what it meant to them as they placed small flags on a memorial wreath. The patriotic wood carvings on display were made by students and the flag folding demonstration were also indicative of the values and respect being instilled in the young people attending Lawrence-Nelson schools.

Following the program veterans and their families were served a meal in the cafeteria and enjoyed conversing with the young people participating in the program.