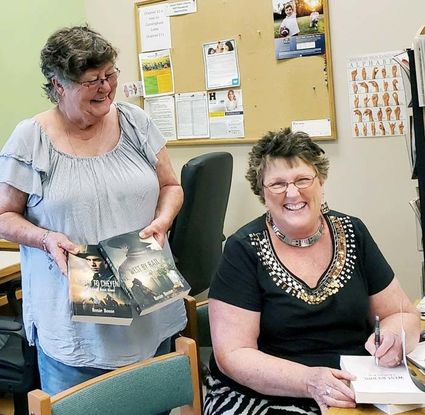 Cindy Traump, Jewell Public Library Board chairman, watches as author Rosie Eilert Bosse prepares to autograph one of her recently published novels. Bosse grew up on a farm west of Jewell and graduated from Jewell High School with the class of 1974. She has authored six children's books and two adult novels. Her latest work "West By Rail," which just came out in June.

Rosie Eilert Bosse, now from Onaga, Kan., grew up on the Gallagher-Eilert family farm west of Jewell. She graduated from Jewell High School with the Class of 1974. Among other roles, she is now a published author.

Bosse's first books were her "Down on the Farm" children's books. The books are based on the characters in the stories she told her grandchildren. Stories are about farms and the animals on them. Characters like, Clicker the dog, Gertrude the chicken, Gnarly the mountain lion and Curly the calf.

After a half dozen children's books, she tried her hand at adult fiction. The re...