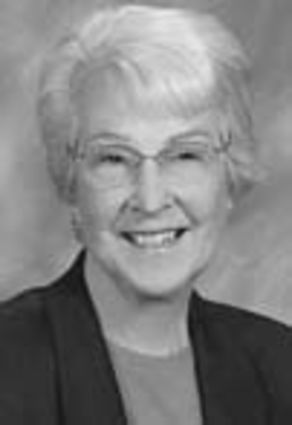 Darlene grew up in Mankato. As a teen she worked at the Ute Movie Theatre, actively participated in all high school activities, and later was a switchboard operator at the Southwestern Bell Telephone office. She graduated from Mankato High School in 1946.

Darlene married Walter Dean “Ole” Smith, in October 1946, in the Mankato Harmony Methodist Church. Their first home was in Salina, until Walt graduated from Kansas Wesleyan. Darlene and Walt then moved to Montrose, where she was Walt’s Number 1 supporter as he accepted the job of principal and coach for the Montrose Public Schools. Together, they began their new phase in life of raising their three children; Ron, Rick, and Cam.

The Smith family moved to Manhattan, in 1957, starting Walt’s career in the K-State Union, with Darlene beside him every step of the way. Darlene and Walt were active members of the Blue Valley Memorial United Methodist Church and they served many community organizations.

In 1972, they accepted an opportunity to work and serve KSU A.I.D. at Ahmadu Bello University in Nigeria. An experience they would talk about often with family and friends. Darlene and Walt were also known for their “Open Heart-Open House” legacy of having nieces, great nieces, and grandchildren, live with them while attending K-State, creating wonderful memories for all who benefited from their generosity.

In 1966, Darlene began her career outside the home. She provided bookkeeping and billing services for medical offices, retiring in 1991.

Darlene stayed active and enjoyed her retirement years. She enjoyed traveling to see family and friends. She also enjoyed playing bridge, bowling and golfing. She was a wonderful seamstress. In addition, Darlene was the “finder and keeper” of family genealogy.

Darlene continued to maintain their home, including all yardwork, after Walt suddenly died in 1996. In June 2018, she moved into Meadowlark Hills Assisted Living.

A small family gathering was held for her burial in Webber Cemetery on Aug. 6. A Celebration of Life will be held at a later date.

In lieu of flowers, the family suggest donations in her memory to the Johnson Cancer Research Center at KSU, the American Heart Association, or the Alzheimer’s Association in care of the Yorgensen-Meloan-Londeen Funeral Home, 1616 Poyntz Avenue, Manhattan, Kansas 66502.

Online condolences may be left for the family through the funeral home website at http://www.ymlfuneralhome.com.